Western Sydney Wanderers have kept their faint hopes of finals football alive by clinching a 2-0 win over Brisbane Roar at Bankwest Stadium on Sunday.

It may not have been a performance to silence their recent critics but style took a back seat to substance, with the Wanderers grinding out a win needed to have some prospect of finishing inside the top six for the first time in four years. 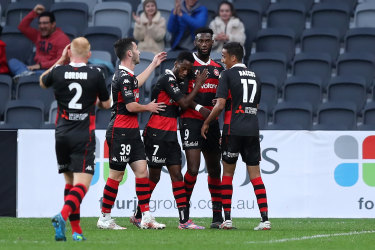 Bernie Ibini celebrates with teammates after his first half goal.Credit:Getty

Goals from Bernie Ibini and Bruce Kamau in each half clinched the win that ensures the Wanderers will have something to play for in the final round of the season next week, needing to beat Adelaide on Thursday and hoping other results go their way to reach the finals.

While benefitting from plenty of wasteful Brisbane finishing, the Wanderers worked hard enough themselves to clinch a vital win. Unfortunately for them, there were few of their fans to witness it: Sunday’s must-win match was played in stadium more than three-quarters empty.

On a run of three successive defeats, and on a cold night, it perhaps wasn’t the easiest sell. The Wanderers also began as if they would rather be elsewhere and if it wasn’t for their goalkeeper Daniel Margush, they could have been behind by two goals early in the match.

He pulled off a fine fingertip save to deny Riku Danzaki from slotting a one-on-one in the ninth minute, before reacting quickly to stop Alex Parsons’ near post shot from rattling the back of the net shortly after.

Those two close shaves sparked life into the Wanderers and the hosts came close to taking the lead with two chances in quick succession.

Graham Dorrans thought he had scored when his shot from distance took a deflection en-route to goal but was dumbfounded as he watched Brisbane goalkeeper Jamie Young read the trajectory perfectly, making a stunning reflex save before stopping Keanu Baccus’ header moments later. However, there was little he could do to stop Ibini’s individual effort on the half hour.

Receiving the ball with his back to goal, Ibini swivelled to his left, then turned his body to fire a quick right foot shot into the far corner, leaving Young helpless to prevent the Wanderers from snatching the lead.

Brisbane grew more desperate for an equaliser late in the match and nearly grabbed one.

Substitute Cyrus Dehmie forced another great save from Margush with a powerful near post shot before Danzaki spurned an absolute sitter in the dying minutes. Kai Trewin’s cross left Margush exposed, finding the unmarked Danzaki a metre out from an open goal but the Japanese forward somehow sprayed his shot wide of the target.

He was made to rue that moments later when Bruce Kamau sealed the win that kept the Wanderers’ season alive, dribbling one to score at the near post late in the match.