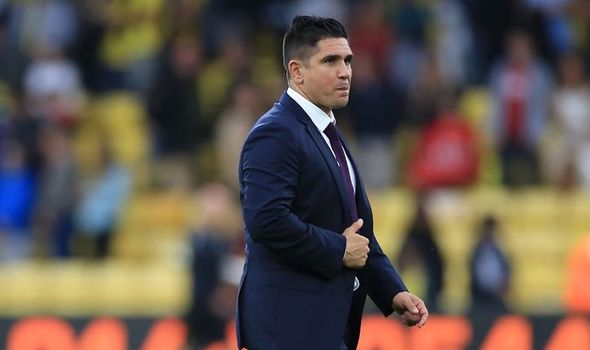 Watford are searching for yet another manager after sensationally sacking boss Xisco Munoz just seven matches into the new Premier League season. The Hornets have pointed to a ‘negative’ trend developing at the club, evidence by a poor run of form.

Xisco’s final game in charge was Saturday’s 1-0 defeat against Leeds. Watford were poor and could have lost by more goals.

The Spaniard guided the club to promotion from the Championship last season. Watford won two of their first four Premier League matches but performances and results have recently taken a dip.

Xisco’s side were comfortably beaten 3-1 by Championship Stoke City in the EFL Cup. They then drew with Newcastle before defeat by Leeds.

“The board feels recent performances strongly indicate a negative trend at a time when team cohesion should be visibly improving.

“The Hornets will always be grateful to Xisco for the part he played in securing last season’s promotion and wish him well for his future career in football.

“No further club comment will be available until the imminent announcement of a new head coach.”

Diego Llorente scored Leeds’ only goal in Saturday’s game but Marcelo Bielsa’s side could have scored more.

Watford goalkeeper Ben Foster blasted his side’s performance, insisting that they are a far better side than they have shown. The 38-year-old conceded that an equaliser would not have been merited.

“I thought if we would have [equalised] it would have been papering over the cracks,” Foster told the BBC.

“We were very poor today. We didn’t have a shot on target, so can’t expect to come away with anything.

“They were very sharp and worked their socks off but if you allow them to do that it’s going to be a long day. If that goal had been given it would have been very unjust to the overall picture.

“I think we’re a better team than what we are showing. We were very poor today – miles away from it. We haven’t had a shot on target and didn’t lay a glove on them.”

The next manager – whom Watford say will be appointed ‘imminently’ – will be the club’s seventh since the start of the 2017-18 campaign.

“It was simple. We know exactly what is the intensity of them, they had more intensity than us,” Munoz said after the defeat by Leeds.

“They won more duels, shot more than us, were more aggressive than us and wanted to win more than us.

“It’s important to continue to work very hard because all points are important in the Premier League. But we need to improve set pieces because we concede a lot of goals from these situations.”