Adelaide won 3-2 after a hat-trick of penalties scored by Socceroo Tomi Juric, but incensed Mariners coach Alen Stajcic said his players felt like they had been “robbed”. 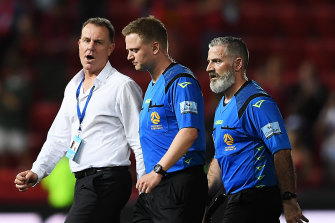 The Mariners led twice but the two spot kicks in question – which both involved Reds skipper Stefan Mauk, who has since been a target of fan abuse on social media – allowed Adelaide to draw level at Coopers Stadium.

Delovski, Football Australia’s director of referees, said he spoke with Stajcic and Mariners chief executive Shaun Mielekamp about the incidents.

“It’s important to come out and people to understand where we’re coming from – we got it wrong, we made an error and we’re human,” he said.

“We’ll coach the referees through that and we want to see the improvement there. Apart from one or two decisions this year, we’ve been good.”

Kurt Ams, the video assistant referee, was also wrong to not call Fielding to the sideline for a review of the decision.

“The defender has done nothing wrong, he just stands there, and the Adelaide attacker is the one that initiates the contact,” Delovski said. “We are coaching our [VAR] guys to keep a high bar of level of intervention … but the VAR has interpreted it incorrectly.”

Fielding should also not have blown for the second penalty, Delovski said. Josh Nisbet was pinged for dragging down Mauk with his arm – but because both players were holding each other, the VAR was right to not step in.

“It would have been better if we played on,” he said. “From a VAR point of view … there is holding from both players, including the Central Coast player, this is normal contact, so those are the facts and those facts are not clearly wrong.”

As for the third penalty, which gave Adelaide the lead in the 85th minute after a VAR intervention, the decision to ping Kye Rowles for handball was correct and in line with the current interpretation of the rule because the ball deflected onto his hand, which was in an “unnatural position”, Delovski said.

A frustrated Stajcic, who declined to speak to Fox Sports immediately after the match, tried to bite his tongue in his press conference.

“What do you want me to say?” he said. “The players probably feel they were robbed, the whole world’s against us – that type of feeling. Whether that’s true or not, that’s how we feel.”