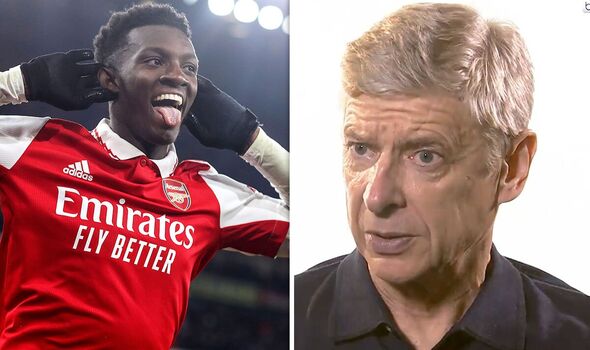 Arsenal’s legendary former manager Arsene Wenger was always convinced Eddie Nketiah had what it took to shine at the top level. The Frenchman knew all along that the striker had more to his game than just goals.

Wenger gave Nketiah his senior debut for Arsenal way back in September 2017. Almost five-and-a-half years on, he is now seemingly fulfilling his potential.

Nketiah has seven goals in his last seven matches for the Gunners. He has filled in admirably in the absence of Gabriel Jesus and netted a brace in the 3-2 win over Manchester United on Sunday.

The academy graduate has had to win over many supporters who doubted he was up to the level required. But both Wenger and current boss Mikel Arteta have always had faith.

Win a pair of tickets to the Premier League or Women’s Super League match of your choosing! CLICK HERE

Speaking in November 2017, after just 28 minutes across three substitute appearances for the first team, Wenger spoke glowingly about Nketiah. He said he had more to his game than just being a poacher and challenged the forward to prove he had what it took mentally.

Wenger told beIN SPORTS: “Eddie Nketiah is a boy who is a striker who has a nose for the goal but he’s not only a goal-getter. That is what is interesting with him.

“He has good physical qualities, he can combine with others, he can integrate a collective game at a very high level, and as well he can get on the end of things and score in front of goal. So he has basic exceptional qualities but after that you have to show that in a consistent way.

Nketiah has not only been that poacher in recent weeks but also proven he has got the game to be an all-round forward like Wenger suggested. He was only 18 at the time but had already done enough to convince Le Professeur.

Wenger insisted it was too early to say how good Nketiah could be but admitted there was no limit to how far he could go in the game. He continued: “It’s too early to say because he has played 20 minutes in the Europa League and let’s not make a star of players like that.

“He has potential and how good is he going to be? Nobody knows because you do not want to predict an unbelievable future but, as well, you do not want to limit the expectations. We are there to help him become as good as he can be.”