FC Copenhagen star Zeca thanked Ole Gunnar Solskjaer for the work done at Manchester United so far after the club’s narrow Europa League defeat on Monday night. The Danish side put up a good fight in their semi-final clash. But it wasn’t enough, with the Red Devils emerging victorious courtesy of a penalty from Bruno Fernandes.

Manchester United weren’t at their best against FC Copenhagen, with the Danish side surprising everybody with a solid and composed performance.

But Solskjaer’s men got the job done in the end, with Fernandes the hero of the hour.

The Portugal international scored the only goal of the game from the penalty spot, converting after Anthony Martial had been fouled inside the area.

For United, the result means they’re just two matches away from winning their first piece of silverware under Solskjaer.

He’s already steered the club to a third-placed finish and the Norwegian is determined to guide them to the Premier League title next season.

And, after the match against FC Copenhagen, the cameras picked up on Zeca thanking Solskjaer for the work done at the club so far. 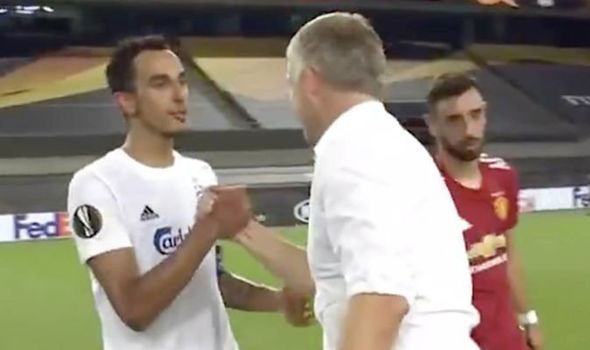 “Thank you very much for everything you have done in Manchester,” he said to Solskjaer, exchanging a handshake with the United manager.

And Solskjaer responded by saying ‘we’re trying to bring it back’.

The United manager has done well in his first full season at the helm and since January in particular.

Just about every fan and pundit was quick to dismiss the 47-year-old back in the New Year, especially after a turgid 2-0 defeat to Liverpool at Anfield.

But United have lost just once in the 24 matches played since then and there’s a sense that, after years of struggling following Sir Alex Ferguson’s retirement, they’re getting back to where they used to be.

Meanwhile, speaking after Monday night’s game, Solskjaer insisted his team were deserving of the win. 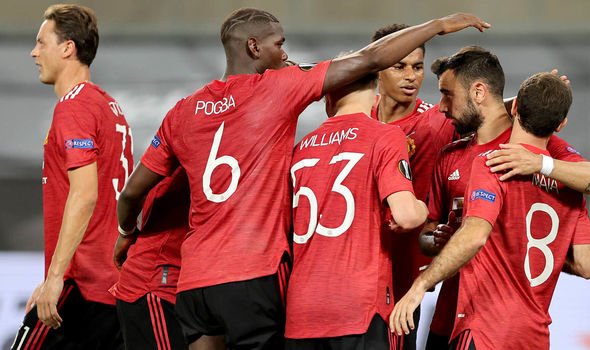 “It’s the third time this season we’ve been to the semis in every competition we’ve been in,” said the 47-year-old.

“I’m delighted that we’re through but think we deserved to win tonight. Their keeper was fantastic – actually, unbelievable – but we hit the post a couple of times and there were a few VAR decisions against us.

“It could have been one of those nights that you end up with a penalty shoot-out because they created opportunities, maybe not shots on target because Sergio didn’t have to make a save I don’t think.

“We had to block, we had to defend well. They made it hard for us. We needed it and thankfully we’ve got six days until the next one and that one day extra will help us.“

Solskjaer also hailed his side for showing patience amid the heat of the battle, adding: “It’s very warm. I think some of these hadn’t played since the Leicester game, so I think they needed a run-out.

“It was a good work-out. Of course, we’re through – that’s the main thing, the only thing really.

“It’s a good team, a well-organised team. They had the press and they had a game-plan. They had triggers where they jumped and they pressed us.

“Of course, they had a decent chance in the first half when they caught Fred on the ball. It was a good recovery from the lads.

“I knew they were going to be hard to break down. It was about patience and not making mistakes and not giving them opportunities that they don’t have to.

“Let them earn chances and we knew we would get chances. Anthony, Marcus, Bruno, Mason and Paul will always create chances in every game.”