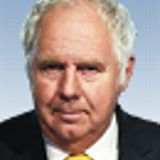 Darke, who called games for the network during the 2010 FIFA World Cup in South Africa, is ESPN lead soccer voice in the United States. He has covered the Barclays Premier League and the Champions League since 1982, and has one of the world’s most recognizable soccer voices.

Where does English football go after the humiliating climbdown of the shamed “Selfish Six” clubs, whose idea of a cosy drama-free cartel lasted precisely two days?

The biggest winners are the fans: the ones who blocked the road outside Stamford Bridge to stop the Chelsea team bus, the ones who took down their Liverpool banners from the seats at Anfield, and the thousands like the lifelong Manchester United fan who declared he would never step inside Old Trafford again so long as the despised Glazer family were in control. Also, the supporter who carried a flag saying: “I like my cold night in Stoke.”

In a year of ghostly games in deserted stadiums, this season has proved beyond all doubt that this game is nothing without these supporters. The clubs now have to do more to hand the game back to fans who are now up for the fight.

Crazy kick-off times, made for TV, that make it impossible for away supporters to travel because there is no train home? Sky-high prices for replica shirts and tickets? It all has to change. Build the Premier League more along the lines of the fan-friendly Bundesliga in Germany, where supporters pay affordable prices and get train tickets thrown in when going to see their team play away from home.

I work in television and understand the dynamics at play here. The Premier League’s lucrative business model is built on the money generated by selling TV rights. Sky Sports can end up paying £11 million per match; BT Sport £7m. Understandably, for that kind of money, they do not want kick-off times clashing, hence the weekend spread. But common sense now has to apply. Southampton cannot be playing at Newcastle on a Monday night, meaning their fans could not possibly attend without paying a big hotel bill.

The owners of the six Premier League clubs that broke ranks — Arsenal, Chelsea, Liverpool, Manchester City, Manchester United and Tottenham — now know that the fans will not continue to take this kind of treatment. The Premier League need to call a meeting to plot a better path forward. “Greed is Good” can no longer be an acceptable mantra.

Meanwhile, we are listening to apparently heartfelt apologies from the likes of Liverpool’s owner, John Henry for getting involved in the “Not So Super League” plot and betrayal in the first place. While the words are welcome, the fact remains that he and his fellow conspirators were happy to ditch all the club’s history and tradition to enter a plastic tournament, a made-for-TV product: one that would have delighted bank managers but killed proper competition.

Arsenal could have finished 10th, as they might do this season, and yet waltzed into the Super League, while Leicester, in third, stayed where they were. There really is no place to hide from such a laughable concept. There was no pathway to the top for the likes of Bournemouth and Brighton, either, and no relegation to worry about in a Super League vacuum where you can be as hopeless as you want without having to worry too much.

Yes, this kind of franchise-based single league like the National Football League and Major League Soccer works in America, but there it is set in stone, accepted by fans and functional within that unique marketplace. But it is hard to believe that businessmen like Arsenal owner Stan Kroenke, the Glazers, Roman Abramovich and Henry were naive enough to believe this thing could fly in Europe, where all of football has been based on pyramids with performance-related promotion and relegation since the game was invented.

How did they not understand that this is the heartbeat of the game? It’s what keeps the fans on tenterhooks: it’s the dream of smaller clubs like Brentford that they could get into the Premier League, the fear of even the giants that they might be relegated. (It’s happened to Manchester United, Chelsea and Spurs before, Liverpool were once a second-division team, and it was not so long ago that Manchester City were in the third tier.)

Those owners were prepared to throw it all away, and for what? So that ludicrously rich men could get richer.

The climbdown was inevitable in the face of worldwide contempt and ridicule, and these owners — as many already suspected — are now exposed as interested only in dollar signs. They will be distrusted now for as long as they continue at the helm.

In my opinion, their positions have become just about untenable. They should be thinking of selling their stakes, because a bond has been broken. Clearly they have no feel or love for the clubs they own or the game of football — with the possible exception of Chelsea’s Abramovich, who has demonstrated otherwise in the past.

The others, though, just do not get it. For all the money swishing around at the top of the Premier League, this is still a glory game — not a get-rich-quick business deal. The landscape has changed, and the fans have beaten the owners of Manchester United, Manchester City, Spurs, Arsenal, Chelsea and Liverpool 6-0.

The seismic shift has been towards the people who love the game most: the supporters. It is a victory we all should relish.