For most of the last two months, it’s been off limits. But if absence makes the heart grow fonder, that’s only part of the reason why Sydney FC’s W-League side are so eager to return to Cromer Park.

Sunday’s clash with the Newcastle Jets marks a return to the Sky Blues’ spiritual home in the northern beaches. It’s technically not their first home game of the season, but it will feel like it. 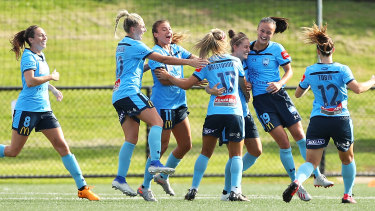 Sydney FC are eager to make a return to Cromer Park, their spiritual home in the W-League.Credit:Getty Images

Two weeks ago, they beat the Wanderers 2-0 at Stadium Australia as part of what you might call an inverted derby double-header with the A-League. The women’s match was played second, partly as an experiment to see how many people would stick around.

Unfortunately, the vast majority of the 14,000-strong crowd emptied after the men’s derby, and at such a big venue, the ones who stayed struggled to create much noise. Players would have been forgiven for feeling deflated at the sight of the barren grandstands, and some observers have questioned whether the double-header concept is actually achieving its aim in growing interest in the W-League. 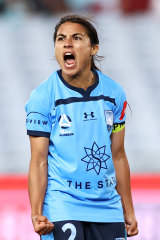 “It’s not a passing thought when I’m walking out for a game and running around – it’s more an afterthought. In a sense it is disappointing,” captain Teresa Polias said. “But our club is a football club – all teams are part of that – it’s not an A-League club. They’re the same product but they’re different as well. You can’t expect everyone to hang around for five hours. It’s hard in that respect … but I do appreciate our club’s trying to bring all the fans together.”

There’s no hiding how much the Sky Blues are looking forward to their return to Cromer Park – the headquarters of NPL side Manly United. The fans who turn up will be rusted-on W-League supporters, and the intimate nature of the venue will make for a better experience for everyone.

“The thing I love about Cromer is the intimate style of the stadium,” Polias said. “I love playing at small boutique stadiums like that, because we get our genuine W-League supporters coming, a lot of young female and male players come along and it makes for a great atmosphere. It sounds better, looks better, feels better out there. We’ve had some really good results there as well.”

Sydney sits top of the W-League after winning each of their first three games, conceding just one goal in the process. Polias is not surprised in the slightest at how younger players like Courtnee Vine, Rachel Lowe, Princess Ibini, Mackenzie Hawkesby and Taylor Ray have stepped up to seamlessly replaced departed Matildas stars who have shipped off to Europe.

“I could put it down to a lot of reasons. The young players we have have been around for a while, they’ve been so patient,” Polias said.

“They’ve stuck around, although they weren’t playing regularly in previous seasons. It speaks volumes about the club and the culture we have at Sydney FC, because I think they know they’re part of something really big.

“They’ve waited for their time and now their time’s come, which is awesome for them – I’m really happy for those young players. And they’ve got all our values instilled in them, on and off the field. The best part is there’s so much room for improvement.”