Report and free match highlights as Tanguy Ndombele’s strike after 57 seconds put Tottenham ahead for much of the game; Wolves saw much of the attacking play and were rewarded when Romain Saiss flicked home late on; Draw sees Spurs into fifth

Romain Saiss’ late goal earned a well-deserved 1-1 draw for Wolves after Tanguy Ndombele had put Tottenham ahead inside a minute.

It was almost a classic Jose Mourinho performance once again from Tottenham, as Ndombele send a low, hard strike past Rui Patricio after 57 seconds. They then sat back and soaked up plenty of Wolves pressure, having only one shot in the second half and their last shot on target in the 21st minute.

Spurs were let down by some lax set-piece defending as Saiss flicked home from a corner in the 86th minute to seal a point for the hosts. Ruben Neves and Fabio Silva both had late chances to win it for Wolves, but were thwarted by Hugo Lloris.

Tottenham missed the chance to go back into the top four and have instead ousted Man City in fifth, but are now four Premier League games without a victory. Wolves move up one place into 11th.

How Wolves took a deserved point 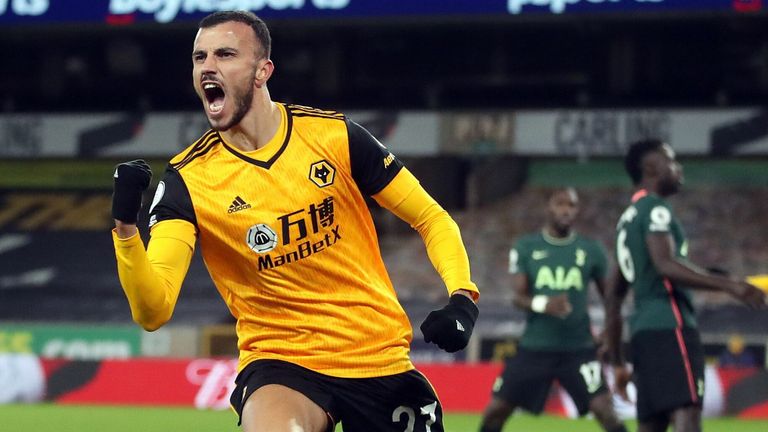 Tottenham started with a bang and took the lead 57 seconds after kick-off. Heung-Min Son won and then delivered a corner, which Conor Coady initially headed away. However, it fell to Ben Davies, who tapped the ball to the waiting Ndombele at the top of the area, who hit a low shot through the effort to beat Patricio.

Wolves’ first sight of goal came after a trademark Adama Traore run, cutting in from the right flank and breezing past three Tottenham players. He then squared the ball for Daniel Podence, but his tame effort resulted in an easy save for Lloris. Shortly after, Ndombele sent a cross into the area from the right, but Sergio Reguilon could only direct a header past the post.

Man of the match: Pedro Neto.

The Spaniard could have doubled Spurs’ lead in the 21st minute. It was more good play from Ndombele as he broke down the field, leaving Wolves players on the floor in his wake. He then picked out Reguilon to his right, but his effort went straight at Patricio. Wolves should have levelled minutes later with their best chance of the half, but Fabio Silva sent a fizzing effort inches past the post after a superb cross from Nelson Semedo.

It seemed early drama was the dish of the day as Wolves had a penalty shout almost immediately after the break. Silva went rolling over after a clip from Eric Dier, which referee Paul Tierney initially waved away. VAR checked the decision and agreed, with no penalty awarded.

Wolves continued to pepper the Spurs goal with chances as the half wore on. After a driving run from Neto, the ball ricocheted between Dier and Matt Doherty before landing at Silva’s feet. He strode forward, but the ball was smothered at his feet by Lloris – who took a boot to the face for his troubles. Neto went close himself soon after, but his thunderous effort was deflected behind.

The hosts continued to mount the pressure – Neves forcing a low save from Lloris in the pick of the chances – and Wolves finally made the breakthrough in the 85th minute. Neto picked up an assist as he fired in a corner which was flicked into the net by Saiss, who found space well ahead of Davies. 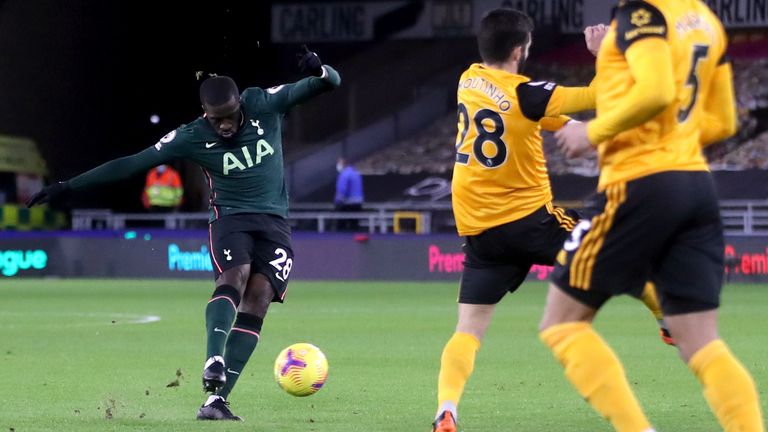 Silva made it a hat-trick of missed opportunities with the final chance of the game in what would have been an incredible Wolves comeback. Neves fired an inviting long ball forward, picking out the run of the young forward in between the centre-backs, but his header bounced off the ground and into the waiting arms of Lloris.

Man of the match – Pedro Neto

Although Raul Jimenez’s absence is being keenly felt up front for Wolves, Neto did a superb job and trying to create for his side.

He nabbed an assist for the equaliser, having made three key passes and 10 total crosses throughout the game. Neto also had his own sights of goal, but like many of his team-mates, could often only find the goalkeeper’s hands.

After the game, Jamie Redknapp told Sky Sports: “That kid is going to be a superstar and he is only 20 years of age. There’s nothing he can’t do.”

What the managers said

Wolves manager Nuno Espirito Santo said: “I think we performed really well, we played a very good game. We conceded very early in the game but the team reacted and we played good – very intense, very aggressive against a dangerous side. I’m happy.

“It’s a learning process. Sometimes you cannot explain how else things happen in the first minute, we demanded focus, we [had to remain] alert, we know how games are going without fans, the edge is not there. There are many games with early goals but if it happens to you, you have to react and I think we stayed in the game and performed well. We combine, we defend, we reacted to the loss of the ball and we had good chances.

“We have a squad of young players that we trust and it’s up to us to choose the right moments. If things didn’t go the way they had with injuries, you probably wouldn’t see too many of these players playing together right now.

“But this is what we want, to make them grow and improve and if the chance is there, then let’s go ahead and give them minutes to help and support them to make them better for us in the future.”

Tottenham manager Jose Mourinho said: “I am [frustrated]. One point against Wolves normally wouldn’t be a bad result because they are a strong opponent, but scoring a goal in the first minute and having the control of the game for the rest of it, and having 89 minutes to score more goals, I still feel frustrated.

“I don’t want to say much. I know the way I prepare the team, I know what I asked from the players I know what I said at half-time. I know all that and I don’t want to say much more than that. I give some credit to Wolves because by losing, they put some pressure on us, which we coped quite well with, we controlled the game very well. But we didn’t have that ambition and desire to go for more.”

Redknapp: Spurs had victory in their hands

“The disappointment is that they had it in their hands. If you are going to keep sitting back, you are asking for trouble. This wasn’t a one-off. There are many, many games where this is happening. It is now becoming a pattern.

“And the more it happens, the more the players start to get negative and think ‘it is going to happen again’.

“I think this is a major problem for Jose right now.”

Wolves are back in action on Tuesday when they travel to Man Utd; kick-off 8pm. Tottenham will host Fulham on Wednesday; kick-off 6pm.