Arsenal fans have been scrutinised for celebrating after Chelsea star Christian Pulisic was carried off in the FA Cup final against Arsenal on Saturday.

The American was forced to leave the pitch with the help of the medical staff following an apparent hamstring injury.

While most supporters watched on worried for the attacking midfielder, footage from Arsenal Fan TV showed supporters cheering as Pulisic’s FA Cup final ended in heartbreak. 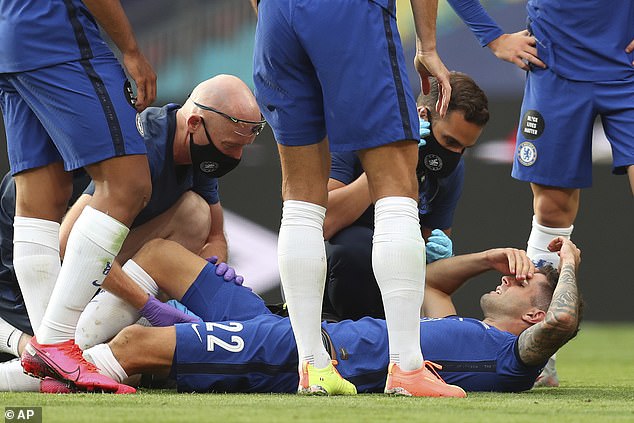 Fans were heard applauding the dismissal of Pulisic, with one fan saying ‘yes, that’s their number one gone’ while another voice in the crowd was heard saying ‘hamstring injury, ta da…wanker’.

Though, host Robbie Lyle refused to join in with the celebrations, saying: ‘I never celebrate an injury.’

Host Robbie Lyle did, however, refuse to join in with the fans as ‘he doesn’t celebrate injuries’

The clip has since been shared across social media and other Arsenal supporters were quick to dissociate themselves from those seen on the fan TV, with many saying their behaviour was a ‘disgrace’ and ‘absolutely diabolical.’

One commented: ‘Just want to state that no member of AFTV is part of our fanbase, we don’t claim them and them celebrating Pulisic’s injury is a disgrace.’

While another added: ‘We are human before football my bro . Being happy over a player’s injury is absolutely diabolical.’

This isn’t the first time AFTV have found themselves in hot water. The site was recently in the news following racist comments made by a fan on the platform.

Arsenal, however, released a statement to distance itself, saying ‘the platform in question has no official association with Arsenal.’