‘He hung up the phone and I never saw him until the evening’: Ian Wright reveals Roy Keane refused to meet him for lunch after he turned up just TWO MINUTES late… and then used the incident to explain Manchester United’s success!

Ian Wright has revealed how Roy Keane taught him a lesson on timekeeping after he arrived just two minutes late for lunch.

The pair were working as pundits for ITV at the 2018 World Cup in Russia when the former Arsenal striker asked if Keane wanted to meet up.

After agreeing to go for lunch together, Wright was surprised to find Keane had left when he turned up just moments after they were supposed to meet. 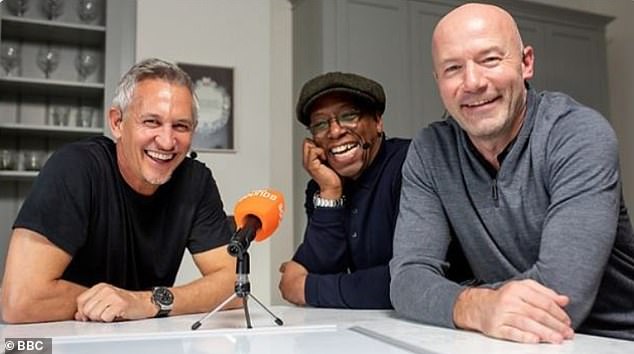 Speaking about his admiration for Keane, who won 12 major trophies with United across 12 years, Wright told BBC’s Match of the Day: Top 10 podcast: ‘For me, he was the best captain in the Premier League.

‘What he ushered in with the Class of ’92, with the great players around him, the consistency of his performances without compromising exactly what he was about in respect of the way he sees the game and his principles and his morals.

‘Honestly, I’ve got so much admiration for Roy Keane. I have to say, we were at the World Cup together [as pundits] and I was thinking, “oh my gosh, we’re really cool mates, it’s fine”.

‘And I remember there was this one time I asked Roy if he wanted to go to lunch, because we had breakfast then we’d go for lunch.

‘I laughed because I thought he was only messing about but he said, “Wrighty, I’m not coming”. And he hung up the phone. And I never saw him until the evening.’

Wright also revealed that when he did see Keane again, the Irishman took the opportunity to explain why his attitude had made United so successful – often at the expense of Arsenal. 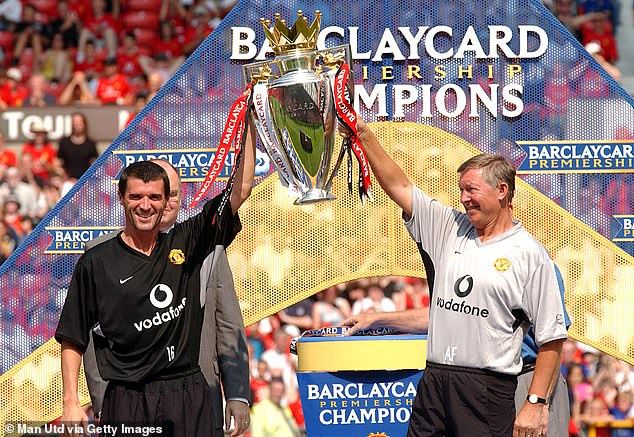 Keane lifts the Premier League trophy with Sir Alex Ferguson back in August, 2003

‘And as soon as I saw him he done one of those cheeky smiles he’s got and he said, “this is why Man United was so successful, we done what had to be done on time, we done what we needed to do”,’ Wright added.

‘And that’s what made me think with Roy Keane is that to be under him, under his stewardship as a captain, he would take nothing in respect of failure.

‘What I like about Roy Keane and anybody that knows him or spends any time with him, obviously he doesn’t suffer any fools, but I’ve never seen anybody who loves football and speaks about football as much as he does.

‘He’ll tell you about a player in League Two, a left-back somewhere, he loves it. The fact is, when he’s off-camera he’s just a very serious man, he’s a serious bloke, he doesn’t deal with foolishness.

‘I cannot stop laughing when I’m in his presence, the way he shuts people down and shuts things off, it just makes me laugh all the time, I just love being around him.’