‘We are one of the best teams in the Premier League… and the world!’: With Liverpool surprisingly off the pace, Xherdan Shaqiri is ready to work his magic for the Reds, starting against his old boss Pep Guardiola

Amid all the uncertainties of the past few weeks of Liverpool’s season, the successive home defeats and Manchester City’s emergence as firm favourites for the title, there are still beacons that shine a light on the dominance Liverpool achieved last season and what may yet be to come when their injuries are healed and their poise is recovered.

First of all among those beacons, there is The Pass. Or maybe that should be The Cross. It was artistry, whatever label you apply to it.

Liverpool manager Jurgen Klopp said afterwards that he thought instinctively that Xherdan Shaqiri had played the ball too early. It turned out that he hadn’t. It turned out to be one of the sweetest assists of the season so far. 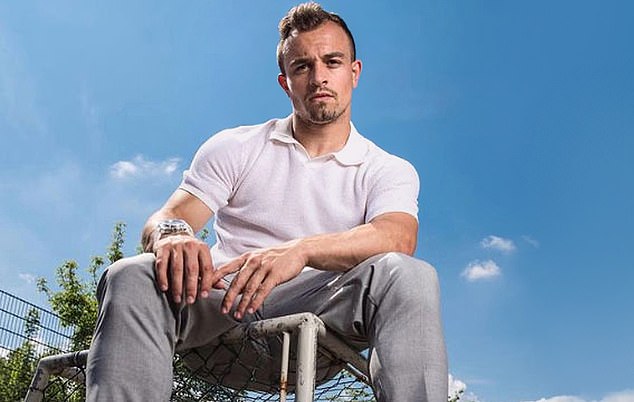 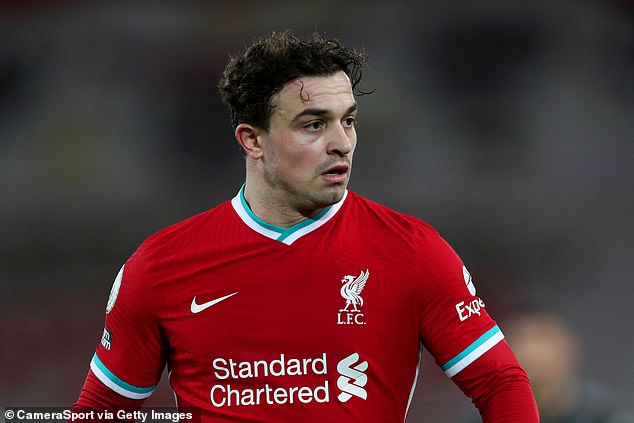 It is worth reliving it because it was a reminder of so much that remains formidable about this Liverpool side even amidst their recent vulnerabilities. It was the 68th minute at the London Stadium last Sunday when a West Ham corner was headed away and fell to Trent Alexander-Arnold. He looked up and arrowed a diagonal ball into the wide open space on West Ham’s opposite flank.

Shaqiri ran on to it. Mo Salah glanced over at him and, when he sensed what Shaqiri was about to do, Salah began to accelerate down the middle. Shaqiri looked up as he got closer to the ball. He saw Vladimir Coufal and Andriy Yarmolenko trying to get back. He saw Lukasz Fabianski on his line. The ball had nearly reached the touchline by the time Shaqiri got to it.

Shaqiri didn’t take a touch. He hit the pass first time, wrapping that wand of a left foot around it as the ball rolled wider and wider, curling it into the path of Salah so that he did not even have to break stride. Salah controlled the pass with his right foot, then flicked it past Fabianski with his left. It was vintage Liverpool.

‘I thought it would be perfect when I played it,’ Shaqiri says as he sits at the new Liverpool training centre.

‘I thought if I took one touch or two touches, the defender would be with Mo already and the goalkeeper never thought I was going to play it first touch.

‘That was the click in my mind. I took it first time and it was perfect timing. It is not simple to do that but we are capable of doing it.’ 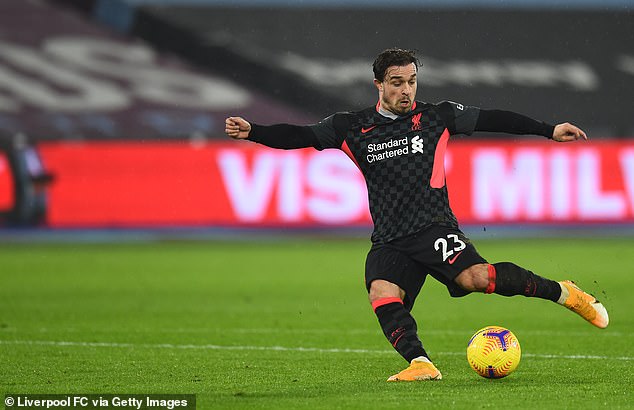 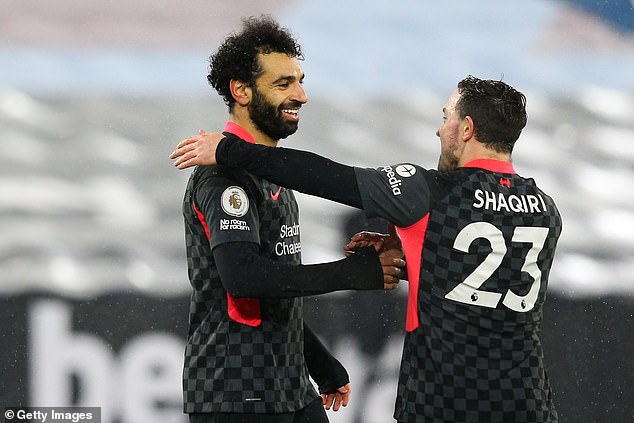 For someone who is routinely referred to as a ‘fringe-player’, ‘a bit-part player’ and ‘a super-sub’, that pass against West Ham was just the latest addition in a highlights reel that suggests Shaqiri’s contribution to Liverpool’s rampage through English and European football in the last three years is rather less marginal than many believe.

‘Do you remember the goal when I scored against Everton at home where it was a similar attack?’ Shaqiri says, as he discusses that Salah strike at West Ham.

That was another Liverpool move started by Alexander-Arnold, spread wide to Sadio Mane, fed into Shaqiri, who clipped it first time past Jordan Pickford in Liverpool’s 5-2 victory in December 2019.

Then there was another pass against West Ham, the one through the legs of Fabian Balbuena that unlocked a stubborn defence at last and played in Diogo Jota for a late winner when the two clubs met at Anfield last October.

And then there was the time when the ‘super-sub’ played 90 minutes in one of the greatest nights in even Liverpool’s history when he laid on the third goal for Gini Wijnaldum 10 minutes after half-time in the 4-0 victory in the second leg of their Champions League semi-final against Barcelona in May 2019.

So maybe we can forget the fringe player description. It would be more accurate to say that Shaqiri’s presence in the Liverpool squad that has won the Premier League and the Champions League in the last two years highlighted the depth of ability lacking in other clubs but also underlines Shaqiri’s reputation at Liverpool as a team player.

‘If someone is injured or out and you get the chance to make the difference,’ he says, ‘I know what I can do and what I can bring to the team. The team knows my qualities. It is also important to me that we are good together in the dressing room and we are a good team.

‘I am not a bad guy and I’m a team player and I like to do everything for this team and I have a lot of experience now and I’m happy to help other players.’

Shaqiri’s ability to step into the breach and help lift a team ravaged by injuries is under even more scrutiny than usual. Brilliant against West Ham, he struggled to make an impact in Liverpool’s second successive home defeat, by Brighton, on Wednesday night. He was not alone in his labours. None of the Liverpool players rose above the ordinary that evening.

The defeat left Liverpool in fourth place and seven points adrift of leaders Manchester City, who they meet at Anfield on Sunday afternoon. Once, it was anticipated it would be a title showdown. Now, Shaqiri and Liverpool know that if they lose, it is likely to mark the end of their attempt to remain champions. They are already 25 points worse off than they were at this stage last season.

‘That is football, my friend,’ says Shaqiri. ‘We are like normal people who have ups and downs. That’s normal. We are not robots who can always be on 200 per cent. The teams in the Premier League are good, even the small teams are difficult to play. The top teams are not always good. It’s not just us. 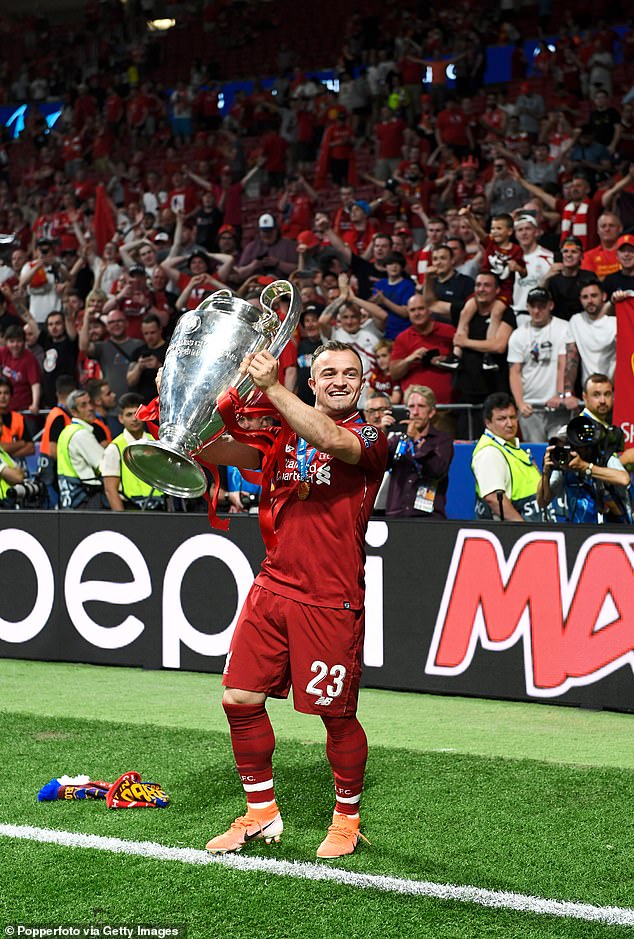 ‘Maybe we have had a few games where we were not so good. There have been a lot of top teams this season who have not been on top form but we are still there and in the top three or four so we cannot complain it’s so bad. I see it differently to people from outside.

‘We are one of the best teams in the Premier League and the world. We are normal people and not robots, so we have weak moments sometimes when we are not so good and other teams are getting better all the time and that’s also a normal thing in life.

As he talks, he does not radiate dissatisfaction at a limited role or defensiveness that a player of his ability is not starting for the champions every week. He is not an agitator. He is popular with his team-mates.

Booming shouts of ‘Shaq’ are the usual accompaniment to his arrival at training. Shaqiri is a gifted wide player and a rare creative talent but there is no resentment about not being a more regular starter, only a sense of fulfilment about what he has achieved in his career so far.

Shaqiri and his family moved from Kosovo to Augst, a community on the outskirts of Basel, when he was four. They were not refugees. The Yugoslav Wars that so disfigured the region had not yet involved Kosovo when they moved to Switzerland and, even though his parents had to work menial jobs, they and Shaqiri profess their affection for everything their adopted homeland gave them.

In Shaqiri’s mind, that includes a career that began with FC Basel and moved on to Bayern Munich, where he played briefly under Pep Guardiola, the opposing manager on Sunday.

‘In his work on the pitch,’ says Shaqiri, ‘Guardiola is one of the best coaches in the world. I enjoyed playing and training under him because he has a really crazy and special mindset in football and not many coaches have these special things. 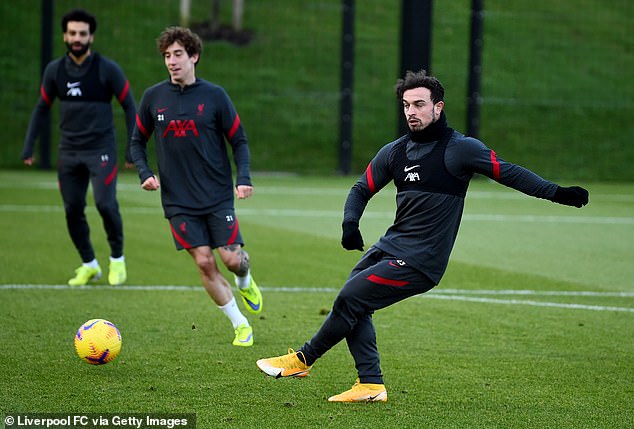 Shaqiri and Liverpool know that if they lose, it is likely to mark the end of their title defence

‘He knows exactly what the team needs. He wants to go into details, details. That is why he is so successful in football. Every detail in football, in training, he wants to do everything perfectly. Even during the game, he knows what he needs to change immediately so that the team can do better.’

From Bayern, Shaqiri moved to Inter Milan. Stoke City, his next stop, jars slightly in that company but it was from there that Shaqiri moved to Liverpool in the summer of 2018 for £13million, the same summer when he scored an emotionally charged last-minute winner for Switzerland against Serbia in the World Cup in Russia.

‘Have I achieved my potential? When you think where I came from, I’m very, very proud of what I achieved in my career,’ says Shaqiri.

‘When I look back in 10 years when I don’t play any more football, for sure I am going to see some nice videos of me, some nice goals, some nice passes. That’s my goal, that I enjoyed my whole career with the ups and downs, which is normal. We can still achieve a lot of things but until now I am really proud of what I achieved.’

With #KloppOut trending and short memories dominating social media, Shaqiri’s sense of perspective and his irrepressibility are exactly what Liverpool need at the moment. Maybe they are exactly what football needs, too. Sunday’s match is a big game but when Shaqiri talks about football, he places the sport he plays in the context of a kid whose family arrived in Switzerland with very little and who are grateful for what life has brought them and their son in the years since. 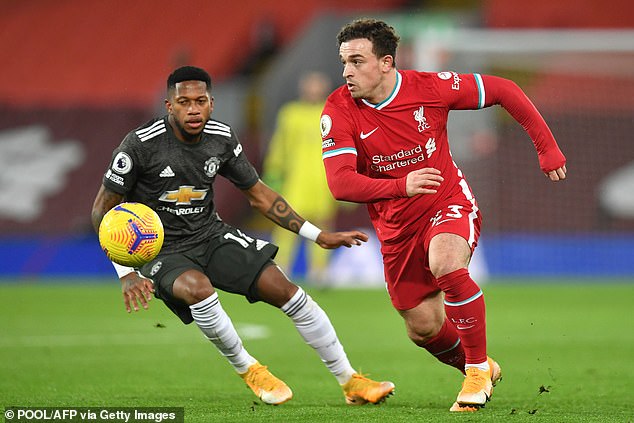 ‘I made my parents and my whole family so proud until now. I hope I can make them more proud. I look after family also and this is for me the most important thing in life before football. People see the present and not the past.

‘I don’t know if you know my history? When I was at school, I was the only foreign person in my class so it was all Swiss people and me from Kosovo.

‘It was so nice, to be honest. I never had problems, thank God. Thanks to the people where I lived, I never had discrimination in my life too much or racism. Where I grew up, I can just be thankful to Switzerland.

‘They helped us a lot, my family, and I am trying to give that back on the pitch. My family loves Switzerland. They live like Swiss people with the mentality.

‘It’s good to give something back to people who gave me and my family so many opportunities. I like the Swiss mentality. I never thought I would speak four or five languages in my life. It is an unbelievable journey.’