Fast bowler Sean Abbott says he would rather sit on the bench in South Africa than play in the T20 series in New Zealand in March amid a new wave of COVID-19 uncertainty.

Speaking before the Sixers’ final regular-season BBL game, Abbott said that with the New Zealand and South Africa tours taking place simultaneously he would happily give up his spot in the national T20 team for a shot at a Test debut after spending the series against India as a reserve alongside Moises Henriques and Mitchell Swepson. 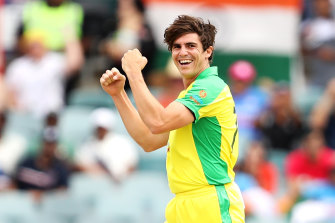 Sean Abbott would rather be on the bench in South Africa than playing in the T20 series in New Zealand.Credit:Getty

Cricket Australia received backlash from the general public, as well as the chair of Australian cricket’s players’ union Greg Dyer, after applying to the federal government for Test players to skip to the front of the vaccine queue to help the tour go ahead.

Expressing a personal view rather than that of the Australian Cricketers Association, Dyer said he believed it was “morally indefensible” for sportspeople to be given priority ahead of higher-risk groups.

Abbott said he would happily take the vaccine if it meant the tour could go ahead, and said there were some “concerns” in the camp about tour safety.

“If the doctor tells me it’s all safe and I need to get it to go and play Test cricket, that’s fine. I’ll obviously run it past my girlfriend to make sure she is OK with it as well,” he joked.

“They wouldn’t send us over there unless they were 100 per cent certain they could keep us safe.”

Abbott will play his second game in this season’s Big Bash on Tuesday against the Melbourne Stars. On his first game back on Sunday night, he became the second BBL player to reach 100 wickets.