When you own the third favourite in a nine-horse race and he only has to run in the first three to get a start in the $8 million Melbourne Cup, then you might think the odds are well in your favour.

But not if your horse is Amade, and the race is the Bendigo Cup.

The OTI-owned import, trained now by Phillip Stokes, needed to hit the frame in the Bendigo Cup to guarantee himself a start in next Tuesday’s Flemington spectacular. 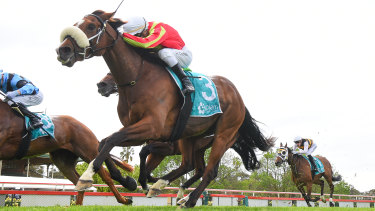 But all hope had gone before the field had even travelled 200 metres. While the remaining eight runners galloped off down the straight and settled in their rhythm, Amade, a former French galloper, just dug his toes in and stood still after the stalls opened.

Jockey Ben Allen pushed, shoved, cajoled, and sooled his partner to no avail for several seconds before the eight-year-old consented to take part, some 20 lengths adrift of his rivals.

In the circumstances, he did remarkably well to get as close as he did – fifth, beaten just three-and-a-half lengths – behind the game, consistent and talented winner Wentwood, which was given an excellent ride by Harry Coffey for emerging young trainer Maddie Raymond.

Wentwood, who has won cups at St Arnaud, Werribee and Terang, and now this group 3 trophy at Bendigo, is more likely to go for the Ballarat Cup than the Melbourne Cup, although trainer Raymond did float the prospect of backing up in 10 days’ time for the multi-million dollar Mackinnon Stakes over 2000 metres at Flemington.

He narrowly landed this prize from the favourite Smokin’ Romans, with Taramansour third to continue on his trajectory for the upwardly mobile Raymond, who, like Coffey, was closely associated with the stable of former champion trainer Darren Weir as they learned their trade.

“The key to him is getting him to switch off, which he did do today,” Raymond explained.

“His attitude and racing manners is probably what held him back. To finally iron that out a little bit, I still think that he’s got plenty of improvement.

“He was my very first horse when I got my trainer’s licence. Glen and Jane Davies sent this horse to me, so it is nice to reward them.

“The Ballarat Cup was on the cards. We’ll get him home and assess. We had the option to throw a nomination in for the Mackinnon. That is 10 days away, and it might come around a bit soon. ”

Coffey was out of breath, but delighted afterwards: “It is one of my favourite races,” he said. “I’ve spent a lot of time around Bendigo and do a lot of work this way. When you live in Swan Hill, you’re driving through Bendigo a fair bloody bit.

“I had a lot to do with Maddie, both (of us) with our time at Darren Weir’s. Darren probably set both our careers off in the right direction and both of us got a go…me and Maddie would not shy away from saying we’re here because of what he did for us.”