Home » Sports News » ‘Animals in a zoo’: Indians test negative and against being stuck in hotel

India have announced their whole team and staff have tested negative to COVID-19 following a breach of the bubble by five touring players in Melbourne and reportedly do not want to be subjected to hotel restrictions when they arrive in Sydney on Monday afternoon. 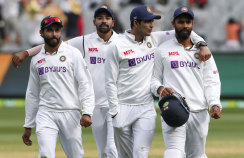 India squared the series at 1-1 in Melbourne.Credit:Asanka Brendon

The players were asked to isolate while testing was done but the Board of Control for Cricket in India issued a statement on Monday saying they were in the clear.

"Playing members of the Indian cricket team and support staff underwent an RT-PCR test for COVID-19 on January 3, 2021. All tests have returned negative results," the BCCI said.

A Cricket Australia spokesman said its players, staff and match officials had also undergone testing on Sunday and all had come back negative.

The Indian and Australian players are due to take a charter flight on Monday afternoon to Sydney, where they will be subjected to tighter biosecurity restrictions than those placed on them in Melbourne. The protocols include not leaving the hotel that has been booked out for the two teams for the duration of their stay unless they are being ferried to the SCG for training or the third Test itself, which starts on Thursday.

However, a report from Indian outlet Cricbuzz on Monday suggested the tourists had reservations about having to live under more stringent protocols than the general public and didn't want to be contained to their hotel while in Sydney.

"We think it's contradictory if you are going to allow fans to come to the ground and enjoy that freedom, and then ask us as performers to go back to the hotel and quarantine. That is especially after we've been tested negative for the virus. We don't want to be treated like we are animals in the zoo," Cricbuzz quoted an Indian team source as saying.

"We want to follow the same rules as every Australian citizen. So, if crowds weren't allowed inside the ground, then it makes sense for them to ask us to quarantine inside the hotel."

After clearance from the NSW government, CA announced on Monday that the SCG would be able to be at 25 per cent capacity on each day of the third Test.

The Indians had on Sunday reportedly expressed unwillingness to return to hard quarantine in Brisbane for the fourth Test but it was hoped an allowance from the Queensland government for the players to be able to mingle in agreed areas inside the hotel would salvage the Gabba Test.

When last contacted on Monday CA said it was yet to hear of any of the concerns from Indian management.

The BCCI is yet to announce any sanctioning of the five players who dined in the restaurant in Melbourne.