It was a German one-two in the Lexus Hotham Handicap as Ashrun, from the European yard of Andreas Wohler, swooped late down the outside to just nose out the former German import Sound, now with Flemington trainer Michael Moroney, to secure the last spot in Tuesday's Melbourne Cup.

The Hotham is always a keenly contested affair as trainers and owners roll the dice for the final time in a bid to make the Cup field in the last race which guarantees the winner a start in the big race. This was no exception. 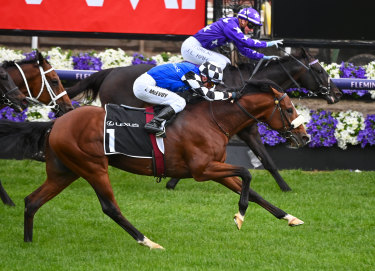 It was the only international raider in the race who prevailed – but only just – and it was a delighted Wohler who confirmed that his five-year-old entire would back up three days later in the $8 million Cup.

There he will look to emulate Wohler's Protectionist, who really put himself and German racing on the map in this country when he won the 2014 edition of the Cup, sprinting clear under Ryan Moore to score easily.

Ashrun, who had finished fourth in the Geelong Cup behind Tuesday's rival Steel Prince on his first start in this country, left it late to get the better of the unlucky Sound, who looked the winner until close to the line.

That he did owed plenty to the clever, unflustered ride he was given by Kerrin McEvoy after he had jumped from the barriers slowly.

McEvoy, a triple Cup winner who will ride the favourite Tiger Moth on Tuesday, did not panic and gradually made ground, coming wide in the straight to get up on the line from Sound, whom Jamie Kah had given every chance.

He carried 61 kilos in the Lexus and will drop to 53 in the Cup, handicapper Greg Carpenter opting not to give him a penalty.

''I was a bit worried on the way around. He didn’t jump well and didn’t have the position that we wanted to have, and then they slowed it up,'' said Wohler.

“Kerrin (McEvoy) said that he came into contention really well and he just kept on going.

''He’s always been aimed at the Cup. We had trouble getting into it, but the horse did really well today. He didn’t handle the track at Geelong and he needed the run at Geelong as well.

''We just have to freshen him up, do everything for his mind and keep him well.”

Wohler said Ashrun was a far more dour horse than Protectionist, who had a touch of brilliance.

“Protectionist was a different horse, a speedier type. He got himself out of trouble quicker because he had more speed. For him he’s more of a galloping type. He didn’t jump off well today and for that he was in a bad position.''

McEvoy admitted he was concerned when his partner stepped slowly.

“We wanted to try and make use of the draw but he came out like a typical northern hemisphere horse. I didn’t get much of a gallop but the horse has done a great job with that big weight and pick up quickly and get into contention. I’m pleased to get the win for Andreas. He’s done two weeks in quarantine but he’s got a Cup runner now and good luck to him.

“He’s a good stayer. He didn’t have a lot of favours in the run. You can’t be taking him lightly on Tuesday. He’ll stay the trip and has a bit of class about him.”