The Australian men's team will follow the lead of their female counterparts by wearing an Indigenous-themed uniform during this summer's home Twenty20 internationals.

The playing shirt, commissioned by Cricket Australia, tells the story of the famous 1868 Aboriginal cricket tour of the UK. 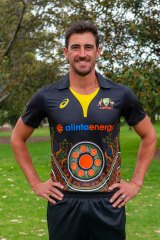 Kirrae Whurrong woman Aunty Fiona Clarke, great-great-granddaughter of Grongarrong (Mosquito), who was a member of the touring party 152 years ago, created the "Walkabout Wicket" design, which will appear on the front of the shirt. She worked alongside Butchulla and Gubbi Gubbi woman Courtney Hagen, CA's Indigenous engagement specialist, to design it.

"This is a great opportunity for cricket to continue sharing stories about the rich contribution First Nations people have made in the sport, starting with the 1868 cricket team as an incredible backbone of all-time sporting history to share and celebrate across the country and globe," Hagen said.

"Through the design, we wanted to create something that paid tribute to Aboriginal and Torres Strait Islander cricketers – past, present and future. We've incorporated artwork that symbolises strength, guidance and support through a connection to our ancestors, represented through the stars and the resilience of the 1868 team represented strongly.

"It was an honour to be able to co-design this shirt with Aunty Fiona." 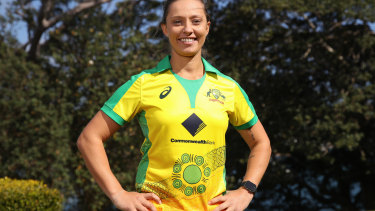 The uniforms will be worn during the three T20 internationals against India next month. The series starts in Canberra on December 4 before games in Sydney on December 6 and 8 respectively.

"I think the players are really excited to be a part of it," said Australian paceman Mitchell Starc.

"It's fantastic. It's really exciting to have a chance to play in an Indigenous guernsey for a series against India.

"The women's team have worn a similar artwork to our one, the Test team have worn the [Walkabout Wickets] logo on our collars a few times and the WBBL teams have all got it on their guernseys this year, so it's really exciting and to have the chance as a men's team to wear our first Indigenous jersey."

The Australian women's team have previously worn a similar design, doing so in a match during this year's tri-series involving India and England.