Sydney Sixers and Brisbane Heat have recorded wins in the WBBL double-header in Mackay, where an established international star and emerging tyro played key roles.

Sixers spinner Sophie Ecclestone captured four wickets in a masterclass display as the England international set up a 17-run win over Adelaide Strikers in the first of Saturday’s two fixtures. 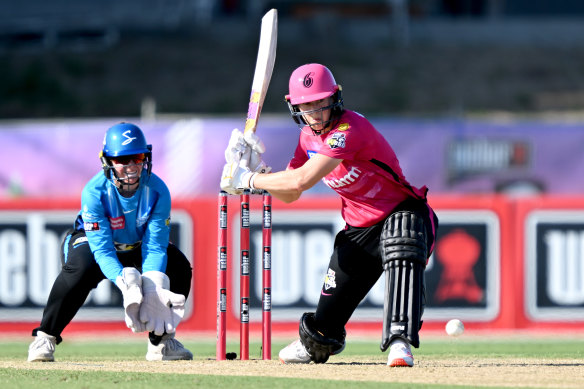 Ellyse Perry at the crease for the Sixers.Credit:Getty Images

Then 19-year-old Heat opener Ellie Johnston (54 off 34 balls) plundered four sixes during a powerhouse performance to help her side to a thrilling nine-run win over Melbourne Stars.

The clash was still in the balance until the final over when Heat captain Jess Jonassen (3-36) picked up three crucial wickets.

Player of the match Johnston only got a call-up due to a knee injury to Heat top-liner Grace Harris and she made the most of her chance.

“It was pretty surreal. It was my first hit of the season and I was seeing them like watermelons,” Johnston told Fox Cricket after her knock.

Heat opener Georgia Redmayne (33) and Georgia Voll (40no) made handy contributions to lift their side to an imposing 3-179.

The Stars responded in style, with English opener Lauren Winfield-Hill blazing a superb 74.

Stars allrounder Annabel Sutherland (45 off 22) got her side to within striking distance of victory before Jonassen’s heroics in the final over kept the Melbourne outfit to 8-170.

With the ball, Sixers left-arm orthodox spinner Ecclestone was lethal and dismissed the dangerous Deandra Dottin (25) and Tahlia McGrath (four) to showcase why the England star is the No.1-ranked T20 bowler in the world.

Ecclestone (4-17 off four overs) dried up the runs and took the key wickets to restrict the Strikers to 9-134.

Perry, who made 55 in the win over the Brisbane Heat on Thursday, was strong down the ground and struck both of her sixes straight and sweet with technical mastery.

Strikers opener Dottin was the key wicket for the Sixers in the run chase. The powerful West Indies all-rounder came out all guns blazing and launched three sixes with the phenomenal bat speed she is famous for.

Ecclestone bowls swiftly for a spinner and Dottin misjudged one to loft down the ground, where substitute fielder Jade Allen took a superb one-handed diving catch.

Perry took three catches and rested herself with the ball as her bowling unit stepped up to do the job.