Australia's vaunted attack has been given another hole to dig out of by its misfiring batsmen after another tentative performance resulted in a first-innings collapse, paving the way for India to storm back into the series.

Any fears that the Kohli-less visitors had become lame ducks after their capitulation in Adelaide can be put to rest. India are up for the fight – and in the driver's seat to level the series after a dramatic start to the Boxing Day Test in which 11 wickets fell on the first day. 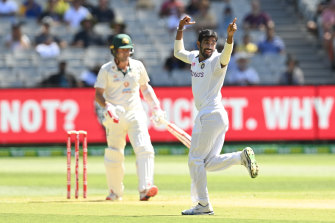 After feasting on Pakistan and New Zealand's bowlers last summer, Australia's batsmen are living on rations against a miserly Indian attack. Batting first after winning the toss, the hosts were bundled out for 195, with Jasprit Bumrah claiming four wickets. No player reached 50. In reply, India were 1-36 at stumps.

The hole left at the top of the order by David Warner is proving considerable – not just for the runs he brings but the tone the aggressive opener sets.

Granted, this MCG track is not conducive to enterprising batting, although Australia's top six is struggling against an attack that bowling to its plans.

"People are coming up with new ways," Marnus Labuschagne, who top-scored with 48, said. "Today, they came up with a heavy leg-side field and bowled very straight and didn't give us anything scoring options on the off-side."

Former Test opener Michael Slater, noted for his dashing style, was critical of Australia's unwillingness to take the game on.

"The pitches are doing enough to make batting uncomfortable at times but there comes a point in your career where if the ball is moving around, you have to have a technique firstly to survive. But I just question the intent of the Australian batting mindset at the moment," Slater said on Channel Seven.

"Matty Wade started and then he’s looked the best all day. But have we got our top six thinking about scoring runs enough?”

Smith was not the team's saviour after falling to Ravi Ashwin for the second time this series. Brought undone playing for turn that was not there in Adelaide, he met his demise here playing with the spin.

Four years ago, the leg slip (or gully) was a sign India had run out of ideas against the champion batsman but it now appears they are confident in their plans.

If Australia's leading three do not score big runs, who does?

It's not Joe Burns, whose place in the XI is again in the balance after being dismissed for a duck. Selectors will be alarmed at the manner in which the opener poked at a delivery he should have left.

Nor is it Cameron Green, who battled to 12, though to be fair the youngster is in just his second game.

It should be Travis Head, who, after two years in the baggy green, has served his apprenticeship but loses concentration just when it appears he is in for a long stay.

Matthew Wade, to his credit, tried to stamp his influence but after racing to 30 holed out to a rash shot to off-spinner Ashwin.

With four changes to their XI, there was an air of desperation in the Indian camp but almost every move they made at the selection table has returned a dividend.

Ravindra Jadeja was brought in to give India extra depth with bat and ball, though his key involvement was holding his nerve to take a catch running with the flight to remove Wade.

And Shubman Gill appears a much safer option at the top of the order than Prithvi Shaw, surviving a tricky hour against the new ball to Australia's high-class fast bowlers to see India to stumps without major damage.

They conjured a miracle for victory in Adelaide, they will need to work wonders to save Australia again.