Under prepared and over matched, England’s tour has started in calamity after they collapsed in the face of a fast bowling clinic from Australia as new captain Pat Cummins celebrated his appointment with a five-wicket haul at the Gabba.

Under heavy skies that eventually bore an afternoon storm vicious enough to end play early, England lost a wicket on the first ball of the innings before folding up for 147 as Cummins (5/38) commanded a pace attack that ran through the hapless tourists in a fraction over 50 overs.

England had tried to find the positives in their limited preparation, which started with quarantine and was then hampered by wet weather. Stuart Broad had suggested they would be fresh, rather than rusty, and that will be especially true in his case after he joined fellow seam bowling veteran Jimmy Anderson in being omitted from the team for the first Test.

That was a curious decision given his experience, but it would have likely mattered little after Joe Root won the toss and followed the tried and tested route of batting first in Brisbane. Cummins couldn’t have picked a better toss to lose as England’s misery took but a single ball to descend.

The crowd clapped Mitchell Starc off his long run then roared in delight as he obliterated the leg stump of Rory Burns in will certainly become a moment entrenched in Ashes folklore. Like Steve Harmison’s wide in 2006, those still finding their seats were left wondering about the sudden commotion.

Burns departed for a duck, his sixth of the calendar year, a mark only surpassed by Indian quick Jasprit Bumrah, a tailender who averages a touch over five in Test cricket. It was the longest of walks and one that was quickly replicated by his comrades.

The moment may have been interpreted as some sort of vindication for Starc (2-35), who has become Shane Warne’s pet punching bag, although it’s unlikely the leg-spin great was featuring prominently in the left-armer’s thinking as he thundered towards the crease with a fresh Kookaburra in hand.

In any case, Starc’s selection was set in stone for weeks within the confines of the Australian camp, and he needed just one ball to suggest the buzz about his pace and swing in training contained more than an element of truth.

These were dangerous times for England. The trick at the Gabba is to find a way to navigate your way towards lunch and then hope the going is better on the other side. Instead, the tourists found themselves drowning against a fast bowling battery in supreme touch and hunting as a pack.

Josh Hazlewood (2-42) started fizzing them past the bats of Haseeb Hameed and Dawid Malan (6), working over the latter brilliantly to have him edging a rising ball to Alex Carey to give the new wicketkeeper his first Test catch. 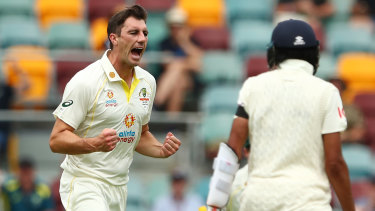 Root was called to guard earlier than he had hoped and Cummins quickly engaged himself to combat his opposite number. It was aggressive leadership from the young captain, wonderful theatre, but it was Hazlewood who executed a clinical plan against England’s most dangerous customer.

He had Root playing and missing, then clattered one into his pads, before Root offered an edge to David Warner in the slips and left for a duck, with England 3-11 and looking very much like an outfit whose only brief warm-up was against their travelling B Team.

England had hoped for more Ashes miracles from Ben Stokes this summer and he may yet deliver. But his return to Test cricket was brief as he first tried to embed himself at the crease, then wandered off for five as Marnus Labuschagne took the catch off the bowling of his captain.

It fell to Ollie Pope and the comparatively stoic Hameed to try and help England limp towards lunch with no more damage on the scorecard. Pope at least looked semi-capable as he showed some intent to move to 17 at the break, with Hameed 25 and England hurting at 4-59.

The rot continued the moment they returned, with Cummins getting Hameed for 25, bringing Jos Buttler to the crease. The wicketkeeper was the first English bat to show any real sign of positive intent and scooted along to 39 off 58 deliveries before he gave Starc his second when Carey swallowed another catch.

Cameron Green surprised everyone with his pace, around the 140km/h mark, when he was utilised before and after the lunch break and he completed the task for his captain, snaring Pope for 35 as Hazlewood took the first of two athletic diving catches at fine leg.

Cummins would add Chris Woakes (21), Ollie Robinson (0) and Mark Wood (8) to his tally, giving him five wickets on his captaincy debut, while England looked every part the bumbling tourists who had little to no idea how to navigate a pitch that offered little movement but ample rise and pace for a home attack who exploited it to perfection.

With water pooling on the field, Australia didn’t get the chance to bat. Instead, they will resume under what are likely to be clear skies on Thursday morning and try to put the first Test in a vice grip.