Home » Sports News » Catching on: Are Australia’s fielding woes a lapse or a major problem?

For those who know and have worked alongside Justin Langer, there was a simple response when asked how the Australian coach-selector would have reacted to the eight dropped catches in the Melbourne Test.

"He would have gone off his handle. You would had to have given him a wide berth," one former player who knows him well said. 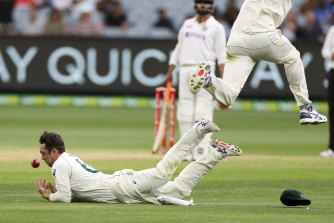 Former Australian opener Chris Rogers put it down to the Australians simply having a bad few days and didn't sheet the entire blame for defeat to their work in the field.

"These dropped catches they put down in the first innings were costly but, equally, it was about their [lack of] first-innings runs and they weren't able to do that," Rogers said. 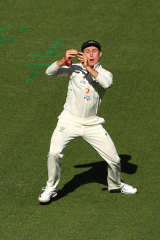 Whether the dropped catches are the start of a wider problem, or an aberration, will be shown in Sydney next week.

Under senior assistant coach Andrew McDonald, the Australians industriously work on their ground fielding and catching, but they haven't had a specialist fielding coach since Brad Haddin stepped down during last year's Ashes series because of family reasons.

There has been debate in recent years over how best to improve catching. One camp says it's about technique and skill, and must be treated as its own training entity, as opposed to it being included as part of fitness drills, in effect killing two birds with one ball.

Pointing to a deeper issue, those with knowledge of the Australian cricket academy argue while there is much attention on throwing, there needs to be more time spent on the art of slips catching.

"We are obsessed with having bowlers bowl at 145km/h … and 90 per cent of their wickets are caught behind the wicket," one former player said.

One theory this summer is that quarantine restrictions in terms of time allowed out have had an impact on fielding standards across first-class and even the Big Bash League season, with players keen to use their time more on batting and bowling. Paine is meticulous in his preparation – to the point he even lost too much weight in the off-season – and often likes to walk to the ground, even before his teammates arrive, and practice on match mornings. He said during the Adelaide Test that this had been constrained because of COVID-19 protocols demanding that he head to the ground in a team van.

However, when asked by The Age and The Sydney Morning Herald whether any potential time restrictions had impacted on the fielding, Labuschagne said that had not been the case.

"It's maybe a concentration thing, maybe a focus thing, but it's definitely not a work ethic thing," he said.

"All of our fielders are working really hard on their exact position. If you are short leg, or leg slip or bat pad, or fielding in the slips, we are all working really hard. I certainly don't think COVID has had an impact on the amount of training we are getting there."

Labuschagne's theory about concentration was backed up by sources close to the team, who pointed out both nations have played little Test cricket – requiring session after session in the heat of the day – over the past year. Head is seen as one player whose concentration can be an issue.

Labuschagne said players, by the time they reached Test standard, had their own "catching technique" but were given adequate feedback on how they positioned themselves "to help you in making it easier to catch".

In reviewing the MCG meltdown, McDonald said there had been "nothing obvious" that had led to the spilt chances.

"I just put it down to some sloppy moments. I don't think you can ever put your finger on exactly what happens in that moment in the player's mind, whether they were fully switched on or not. But nothing clear from our point of view," he said.

"Our preparation was good around the amount of catching. It was the second-up Test match, therefore potentially any of concentration issues I don't think are probably relevant. A lot of guys had a lot of Shield cricket leading in as well, plus some 'A' games.

"I don't think there were any excuses there – we just weren't able to execute in those moments."

What appears clear is that Australia's skips cordon lacks the surety and aura of the days of Mark Taylor, Shane Warne, Mark Waugh and, at gully, Steve Waugh, and there will be change come Sydney.

Joe Burns typically stands at first slip – Wade spent time there in Melbourne after rolling his ankle – but has been axed from the XI. Wade is the team's primary ball shiner at mid-off, meaning Warner – if McDonald is right – will likely now stand alongside Paine should he play. Warner, however, is known to not be overly keen about life in the cordon.

Amid the debate about Australia's performance in Melbourne, Mark Waugh's comment highlighted how easy it was to forget how good the Australians had been in Adelaide when all went right in their demolition of the tourists. That, clearly, was their Jekyll, then came the Hyde of Melbourne. Just which character shows up in Sydney will shape where the Border-Gavaskar Trophy resides.