The $5 million Caulfield Cup is set to see its giant prizemoney pot cut and be run mainly as a race for local gallopers next season as a result of the coronavirus pandemic.

The world's richest 2400-metre handicap will still boast a significant purse, but, says Melbourne Racing Club chief executive Josh Blanksby, the club is not expecting many overseas entries and is bracing for a stake reduction. 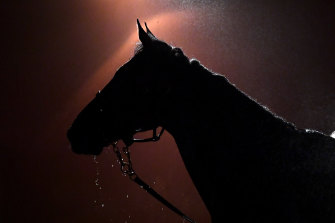 The Caulfield Cup prizemoney is set to be trimmed this year.Credit:Getty Images

At the weekend Racing NSW announced, with almost no notice, that it would be slashing prizemoney for its multi-million-dollar races at The Championships over the next fortnight, assuming racing goes ahead.

"As I sit here I probably say it would be reduced," Blanksby said on RSN radio when asked about cuts to the Caulfield prize pot.

"But we want to work with all the clubs and Racing Victoria to make sure that its been done in a concerted sort of way and what's required.

"It could be a very different Cup. I am not sure if international participation will be high on the agenda for those coming or us seeking it as well. It could be a different landscape."

The race last year was won by a Japanese raider in Mer De Glace.

Blanksby acknowledged that the spring carnival might even have to be pushed back.

"Everything is on the table. At the moment everyone is focused on putting racing on.

"But in terms of planning, right now is when we would be in the middle of our planning and looking to launch the Caulfield Cup, but right now that's all been put on the back burner.

"There's a huge amount of sport going on in November and December so hopefully we are back up and running in time."

Asked if he though the prizemoney war, which has escalated over the past couple of years, driving up stakes in NSW and Victoria for both existing and new "pop up" races might be over, Blanksby answered in the affirmative.

"I think that's a pretty reasonable position to take. It's going to be a different business world when we come back from this.

"What will consumer spending be like? You'd have to think it would be hurting and that we would be in a recession for a while.

"How much money is there in the punters' wallet? They are in the end the ones who fund the prizemoney. I probably agree with that, that there's a chance to recorrect.

"Even before this we were starting to see wagering turnover come off for a number of reasons so this might have accelerated these discussions."

Blanksby also said that the coronavirus crisis and the desire to keep racing going has seen the former warring parties work together, realising that in unity they have more chance of success than in division.

This might also help change the landscape, he believes.

"You hope so … crisis brings enemies together. The work between the states on the protocols and procedures around coronavirus has been fantastic and everyone is working together.

"You saw that on Wednesday when Ladbrokes Park was called off. Sydney and Perth races were called off [too]. Lets hope there's a bit of a silver lining to this."

Blanksby would also back moves to introduce regionalised racing in Victoria for the duration of the crisis if that helped reduce risk and ensured the sport could continue.

"I think anything that ensures we are protecting the participants and society in general in terms of a reduced footprint would work.

"We are set up a little bit that way in Melbourne at the moment with where the training centres and major tracks are, that can be done.

"Government is seeing racing as an essential industry, it employs so many people and the economic benefit [it brings]."

The MRC's principal track is Caulfield, but it also runs Sandown and Mornington and in addition it has diversified business interests in pubs and club, all of which are under restrictions now.