Chris Green has revealed his "complete shock" at being handed a 90-day ban that ruled him out of the end of last season's Big Bash.

The Sydney Thunder star was suspended from playing in Cricket Australia competitions after the governing body received results in January that deemed his bowling action illegal. 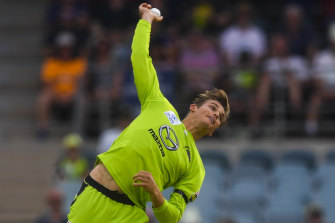 Chris Green continued to travel with the Thunder during his ban and used the time to reset his bowling technique.Credit:AAP

Bowlers are not allowed to straighten their elbow joint more than 15 degrees from the moment the arm passes shoulder height and the point the ball is released.

Green said he continued to travel with the Thunder during the ban and used the time to reset his bowling with coaches at the club.

With COVID-19 further delaying his return, Green said he had come back from a six-month training schedule as a better bowler.

"It was a complete shock and it did take me by surprise at the start," he said.

Green said the experience gave him a better perspective and now he never takes a game – or his time in the spotlight – for granted.

"You can sort of gloss over things when things are going well and winning," he said.

"When you lose, or you have a setback, or you're up against it; that's when really you get to learn the most about yourself and your game … it also tests how much you want it."

'Time away from the game, whether through injury or my circumstances as well, just put things in perspective.'

Green is back in the Thunder squad and said he wanted to perform well for the people who stuck by him through the ban, including sponsors and fans.

"That was something that helped me on those days where, naturally when you do have a setback, you're gonna wake up less motivated," he said.

"Knowing so many people were willing me on and wanting me to do well and do better was incredibly helpful to get me there."

A fan favourite last year, Green said he believed his performances had potentially suffered as a result of the expectation.

"When you've got so much support behind you … you really want to try and pay back the faith and potentially that's been my own personal downfall when I haven't executed as well," he said.

Green's ban was not the first hefty sanction from CA.

Wicketkeeper Emily Smith, 25, was last summer banned for 12 months, nine of which were suspended, for posting a video of the Hobart Hurricanes' line-up on Instagram from a restricted area before a match against the Thunder on November 2.

The contest was later washed out, but Smith was still found to have broken anti-corruption protocols.

Last month, CA gave the Sydney Sixers a $25,000 fine due to an "administrative error" that led to fast bowler Hayley Silver-Holmes being included in their first XI despite not having her return from injury approved by the Big Bash Technical Committee.

Despite discovering and reporting the error, the club was still punished, although $15,000 of the fine was suspended for 12 months.

Green said it was hard for him to say whether sanctions handed down by the governing body were too harsh.

The Thunder play the Melbourne Renegades on Saturday night.