Australia avoided a series whitewash as they survived a mid-innings wobble to beat England by five wickets in the third T20 international and regain their top-ranking in the sport's shortest format on Tuesday.

Having restricted England to 6-145 at Southampton they appeared to be cruising as they reached 1-70 off seven overs before three wickets for inspired spinner Adil Rashid slammed the brakes on their progress. 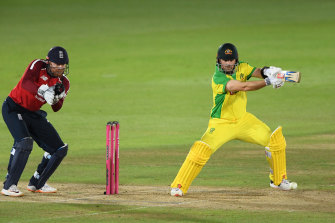 Aaron Finch gets one past English ‘keeper Jonny Bairstow en route to his 39 off 26 balls.Credit:Getty

But England's fielding was ragged and they spilled several catches before Mitchell Marsh plundered 13 off paceman Mark Wood's final over to ease Australian nerves and put them firmly back in the driving seat.

In the end it was reasonably comfortable for Australia with Marsh striking the winning single off Chris Jordan with three balls left to finish unbeaten on 39. 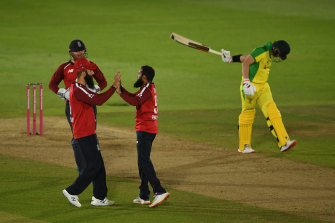 Adil Rashid (right) celebrates the wicket of Steve Smith, one of three scalps taken by the English spinner.Credit:Getty

Jonny Bairstow had earlier top-scored for England with 55.