Sydney’s champion apprentice, Tom Sherry, had his race-riding licence suspended for four months on Thursday after he breached NSW Health orders by attending trackwork last week and was subsequently found to have COVID-19.

Sherry, who is currently doing 14 days of home isolation after testing positive to COVID-19, had the test on September 14 but turned up to work the next morning, breaching the health orders in that he should have isolated after the test. 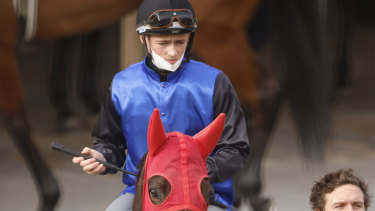 Tom Sherry has been banned from race riding for four months after breaching NSW Health ordersCredit:Getty

When Sherry’s test results came back positive to COVID-19 on September 15, he immediately reported what had happened to his boss, trainer Mark Newnham, who told Racing NSW.

“I have had to move out of my home [because it was in a local government area of concern a month ago] where I lived with my partner, who is my only family in Australia,” Sherry told stewards.

“I know I have breached the rules and I’m taking full responsibility for that.

“COVID has been tough on everyone, but especially being an apprentice, and it being an important time of year for the racing calendar, I was just trying to work my hardest to get every opportunity I can. 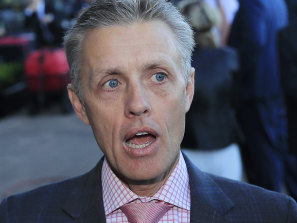 Mark Newnham was fined $18,750 after pleading guilty to negligence relating to COVID protocols.Credit:Getty

“There was no intention to put anyone in the racing industry at risk because I wasn’t aware that I had COVID-19.

“I know you say that a stuffed nose is a symptom and I should have taken more precautions. If I took a precaution every time I have a stuffed nose or headache, I would never be at the races.

“I’m constantly rundown and constantly feeling unwell because of the circumstances of racing and riding light.”

Lawyer Wayne Pasterfield, who acted for Sherry and Newnham, told stewards he was concerned for the young jockey’s mental health.

“This is a different case to those jockeys in Melbourne who thumbed their noses at rules,” Pasterfield said.

“This is a different kettle of fish. He didn’t choose to get COVID, and he didn’t know that he had tested positive until the next day. He was just trying to do the right thing and unintentionally did the wrong thing.

“Tom is doing it tough because of this, and I’m concerned for his mental health if he isn’t riding.”

Racing NSW stewards were mindful of the mental health effect not riding would have on Sherry, so only suspended his licence to ride in races. It will mean, when he is cleared of COVID, Sherry will be able to return to riding trackwork and barrier trials.

“The thing that Thomas is most guilty of is work ethic, that he felt obliged to come to work,” Newnham said.

“If all my employees were as keen to come to work as he is, it would be a lot easier to run the stable. There is never a day where he is not at work on time, if not early.”