‘Doesn’t matter how c**p England are, David Warner getting himself out for 95 will never not be absolutely hilarious’: Twitter relishes Aussie opener being dismissed in 90s for the second time in a row – as commentator Mike Hussey is blamed for cursing him

There hasn’t been much for England fans to cheer so far in the 2021-22 Ashes series, with Australia following their thumping nine-wicket win in the first Test with a strong batting display on the opening day of the second in Adelaide.

As such, they are taking any chance they can get to celebrate – and old enemy David Warner provided a rare moment of joy for the Barmy Army at the start of the evening session.

Seemingly cruising towards a century after getting through a tough start to his innings, Warner slapped a short, wide ball straight from Ben Stokes straight to Stuart Broad at short extra cover.

Having been out for 94 in Brisbane, Warner’s 95 was the second time in a row he had been out in the 90s – only the second Australian to do so in Ashes history. 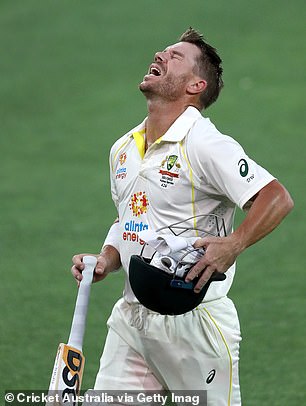 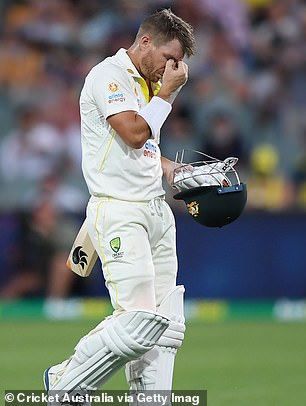 Twitter was quick to react, with England fans taking solace in seeing the back of a man who has caused them so much pain in the past.

@JournoJack25 tweeted: ‘Doesn’t matter how crap England are, David Warner getting himself out for 95 will never not be absolutely hilarious.’

Referencing Warner’s previous misdemeanours – including Sandpapergate and punching England captain Joe Root – @HarryMoore93 tweeted: ‘What a shame for @davidwarner31 couldn’t have happened to a better bloke…’

It didn’t go unnoticed that Warner fell just moments after commentator and former team-mate Mike Hussey had eulogised his hundred.

@shamak_layeeq tweeted: ‘What have you done @mhussey393 !!! A commentator’s curse to end one of the best and toughest innings by @davidwarner31.’

And @AndyHa_ added: ‘The Ashes well and truly alive because of one ex-cricketer. And that ex-cricketer is Michael Hussey.’