When Quinton de Kock pulled out of South Africa’s side for their T20 World Cup match against the West Indies, because he did not want to join his teammates in taking the knee, it was another chapter in a never-ending story: the fraught, intertwined relationship between sport and politics in South Africa.

During apartheid, the South African government desperately sought the legitimacy the sporting arena could provide. They were desperate to continue playing normal international sport – and then, when the team was banned from official international cricket and later rugby, organised rebel tours to entice foreign teams.

When Nelson Mandela wore a Springboks shirt at the Rugby World Cup final in 1995, it was a moment that seemed to symbolise the power of sport to help bring unity to South African society. The notion has been severely tested in recent years. While there have been moments when sport has seemed to galvanise South Africa – above all, Siya Kolisi lifting the Rugby World Cup two years ago – more often it has offered a mirror to a deeply troubled, fractured society.

In cricket, these divisions have never been more apparent than in the past 18 months. The murder of George Floyd by a police officer in May 2020 gave new impetus to the global Black Lives Matter movement. When South Africa’s cricketers returned to the pitch, they were immediately confronted with how to address the movement’s protests.

“It’s something that we need to take seriously, like the rest of the world is doing,” fast bowler Lungi Ngidi said in July last year. He thought it was an uncontroversial response to a question about BLM.

Instead, it sparked a bitter rift within the South African game, as four prominent former white players accused Ngidi of ignoring the plight of white South African farmers being attacked. 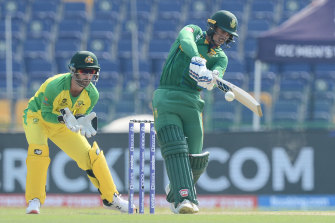 One young player had his face painted white by a coach because he had dirty boots. Ashwell Prince, South Africa’s first person of colour to captain the country in a Test match, was called a “quota player” by teammates. Paul Adams, who played 45 Test matches from 1995-2004, was nicknamed “brown s–t”; the phrase was sung in a team song. Mark Boucher, who is now South Africa’s head coach, has admitted to singing along.

Unlike many national teams, South Africa did not take the knee in their first match after Floyd’s death. Instead, the side initially took what was described as a team decision to wear black armbands, remembering those who died during the pandemic and supporting a campaign to raise awareness about violence against women.

Cricket South Africa had previously allowed players to either take a knee, raise a fist or stand to attention before matches. During the tour of the West Indies this year, de Kock had been the only player not to take any of these three options, attracting criticism from anti-racism campaigners.

“I’ll keep my reasons to myself and it is my own personal opinion,” De Kock said at the time.

Before South Africa’s World Cup opener against Australia, while all Australian players took the knee, only eight South African players did – de Kock, Anrich Nortje and Heinrich Klaasen all stood with their hands by their side. This lack of unity led to Cricket South Africa deciding that all players should be mandated to take the knee in the remainder of the World Cup. Nortje and Klaasen took the knee, de Kock refused, pulling out of the match. Unless he changes his stance, he will not play again in the World Cup.

De Kock’s decision now means the international future of the finest South African batsman of his generation is in jeopardy.

“We can’t escape the consequences of the choices and decisions that we make,” Temba Bavuma, South Africa’s captain said in his press conference.

“It’s nice to have a cricket question,” Bavuma said after a rare question on his side’s eight-wicket win. But South African cricket has never been about runs and wickets alone.