Quinton de Kock would not understand the enormity of the furore he has created. South Africa’s best batter is an anti-disciplinarian who does not enjoy being told what to do.

The decision of Cricket South Africa to mandate taking a knee in support of the Black Lives Matter movement was the proverbial red rag to a bull, particularly given his sacking as captain in March.

De Kock enjoys the simple pleasures in life. Fishing, camping in the bush and spending time with his dogs have appealed more and more as his career has progressed.

He remains within the Proteas camp and they hope to rehabilitate him. At the time of writing, he had still not made the promised statement explaining his actions.

In the complex world of South African society, these situations are never as simple as they appear.

De Kock and South Africa’s best black player, fast bowler Kagiso Rabada, are close. They came through the South African underage teams together as the stars of their generation. 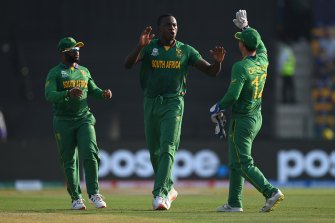 With a population that can be crudely defined as 80 per cent black South African, 10 per cent coloured and 10 per cent white, de Kock’s decision not to take the knee before a T20 World Cup game against the West Indies, thereby ruling himself out of the team, has generated fierce debate.

Needless to say, the majority of the “Rainbow Nation” are firmly of the opinion he has let them down.

De Kock, and the “establishment”, have already endured a couple of meltdowns, when time away from the game was disguised or denied.

South African cricket administrators and players have been among the slowest in the world to acknowledge the reality of mental health concerns. “Take a dose of cement and toughen up” was the prescription for decades. It took the COVID-19 pandemic to finally start changing attitudes.

The debate about whether Cricket South Africa’s last-minute directive, which ordered the team to take a knee, infringed on the players’ individual rights to freedom of expression are regarded as an irrelevance, given South Africa’s uniquely heinous history of apartheid, segregation and prejudice.

The chairman of CSA’s recently convened board of directors, Lawson Naidoo, denied the directive he authorised amounted to an instruction to the players to support a political movement.

“It is not a political statement, it’s about standing up to fight against racism. Given the particular history of South Africa, we should be global leaders in showing the world the way in which we can come together to defeat racism and all other forms of discrimination,” Naidoo said.

As much as sports stars in the rest of the world may have the “right” to choose whether, and how, to support their teammates in a cause, Naidoo (and most South Africans who have voiced their opinion) believe South Africans do not have that luxury.

“Our diversity should be the glue that binds us together, to be able to reflect on the history of this country and lead the world in opposing racism, and that’s really all we’re asking the players to do,” Naidoo said. “There have been ongoing discussions within the team and we thought it was important that they be assisted in this, which is why the board took the very rare decision of issuing a direct instruction to the team, that this is what we expected of them.

“I had a meeting with the director of cricket [Graeme Smith], the team coach [Mark Boucher], the captain [Temba Bavuma] and the team manager [Volvo Masubelele] to convey the decision of the board. It was accepted, and it was implemented with the exception of the circumstances around Quinton de Kock, which, as I say are not entirely clear at the moment.

“We wanted to give players time to resolve this internally. We knew discussions were continuing, we held back, hoping that the team will be able to find each other, but the board felt it necessary to intervene. I accept the decision could’ve been made earlier.”

The chances of the team “finding each other” or comprehending the magnitude of the global reaction to their divergent public poses were non-existent. A statement was prepared by the players, but never released, when the national team was on tour in the West Indies 10 weeks ago.

It reveals the collective naivety which still existed following an initial decision not to take the knee followed by the option of allowing players to make personal choices.

“We have decided that we will not compromise our principles for the optics of a perceived ‘team’ gesture. We are individuals and our freedom of individual expression is enshrined in the greatest constitution in the world,” the unpublished statement said.

“We wish to reaffirm the Proteas’ support of BLM, a movement that stands for equality and justice across all races, ethnicities, religions and creeds.

“We hope that moving forward, the people of South Africa and the West Indies, the cricket-loving public and fans of the Proteas from around the world, can take our reactions and our actions as a team and as individuals within the team, with the respect that we give them.”

It was hard to see respect being shown by the white players, including de Kock, who made no gesture at all.

It was not a straightforward decision for them. It had much to do with their communities. One player claimed he had property vandalised in protest at his initial decision to take a knee and another admitted that pressure from his family not to make the gesture had been overwhelming. He apologised to his black teammates and assured them his support for them was sincere, although he would no longer be joining them.

Regular references to religious beliefs are curious and confusing. At no stage has anybody within cricket, players or administrators, been able to explain how taking the knee conflicts with their religious convictions. No passage in a holy book or scripture has been referred to.

The fact is some players were not concerned by the “optics” of the disjointed approach to supporting the movement against racism and prejudice. Others were, resulting in the CSA board directive.

Healing divisions in South African society continues to be a long and, at times, painful process.