Steve Smith may only be the leader in a caretaker capacity, but he has planted his flag and announced he is in for the long Ashes haul with the bat, as more misery awaits England over the weekend.

The hosts are in a commanding position in the second Test after the visitors’ embattled openers failed a shortened pink-ball examination under lights against an Australian attack missing their two best fast bowlers.

England found comfort in an act of God on Friday night when a thunderstorm halted Australia’s charge but six days into the series it is already apparent the men in baggy green have their measure.

Joe Root will need to produce an innings at least matching those of his opposing number Smith, David Warner or Marnus Labuschagne if his side is to have any hope of dodging a 2-0 scoreline when they leave Adelaide. When stumps was drawn 19 minutes early, the Australians had England in a world of hurt on 2-17 in reply to 473.

Travis Head was the beneficiary at the Gabba, here it was local hero Alex Carey, who crafted a crisp half-century in his first appearance in the baggy green at home.

Comeback captain Smith shook off any rustiness from his lack of match play with a 5½-hour iron innings, and though he did not post a fairytale century he has signalled his arrival in the series.

As Labuschagne completed another agenda-setting century, Smith fell tantalisingly short of joining his batting pal in three figures, trapped in front by James Anderson for 93. 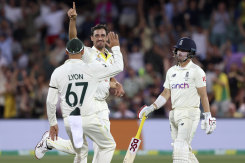 Reduced to a mere mortal since the 2019 Ashes, Australia’s modern batting wonder is showing signs he is ready to return to the heights of his halcyon years.

Smith is a workhorse who needs volume to thrive. A player who relies strongly on feel, he once claimed he forgot how to hold a bat after a long break. The modern schedule, especially during a pandemic, does not go hand in hand with perfect preparations for Test series.

Last summer, his lead-in to the showdown with India was white-ball laden. The big scores came but for a player like Smith run-a-ball hundreds are no substitute to hours and hours of grind in the Sheffield Shield. His program this season has again been dominated by the limited-overs format.

Smith lasted just half an hour in Brisbane before nicking off uncharacteristically fishing outside off stump.

As all eyes focused on Warner’s quest to be fit for this game in the Adelaide Oval practice pitches, several nets away Smith tested the shoulder joints of Justin Langer’s assistants, who threw him hundreds of balls over some three to four hours at training on Tuesday and Wednesday. It was England’s turn the last two days.

After the blueprint provided by New Zealand and India, there was nothing imaginative in England’s approach. Stack the leg side and attack Smith’s body with a barrage of short balls. If Smith was to stay there for a long time, it would not be a fun time.

It worked to the extent that the runs did not come easily for Smith, but nor did they threaten his wicket, their lines and length reducing the likelihood of bowling him, lbws and catches behind the stumps.

The strategy is reliant on Smith erring, which, as England should appreciate, is a rare occurrence in Ashes cricket. They had to wait until his 201st ball before one came, instructively when Anderson pitched up – a rarity for England’s bowlers – and Smith missed one which nibbled off the seam.

The tourists had only themselves to blame for their woes in the field. Labuschagne is too old to believe in Santa Claus, but he does not need to. He has Jos Buttler and Ollie Robinson. After Buttler let him off the hook on 21 and 95 on the first day, Robinson extended the charity.

The tall England quick, bowling a fuller line than his teammates, found Labuschagne’s outside edge, belatedly caught by Buttler, only to be pinged for an errant front foot. Some quicks overstep in search for that extra effort but that excuse was not available to Robinson for a delivery clocked at 117.9 km/h.

Shortly after, Robinson put down a difficult chance at square leg, though, to his credit, he recovered his composure to trap Queenslander plumb in front for 102. Thankfully for England, Labuschagne’s predictable review was predictably turned down.

England’s effort was rewarded by the quick wickets of Head, who tripped himself up misreading a well-flighted offering from Root and was bowled, and Cameron Green.

Green, coming off a golden duck in the first Test, was bowled again, this time playing down the wrong line to a gem from Ben Stokes which moved just enough to beat his outside edge.