Hambantota: England all-rounder Moeen Ali was isolating in Sri Lanka on Monday after testing positive for the coronavirus upon his arrival in the South Asian country for the team's two-Test tour.

Pace bowler Chris Woakes has been deemed a possible close contact of Ali and was also observing a period of self-isolation in developments which have cast an early shadow on the tour that takes place weeks after a white-ball trip to South Africa was derailed by a spate of positive COVID-19 results. 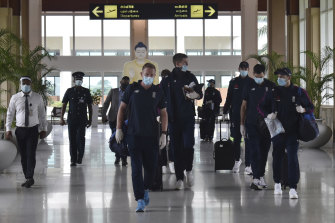 The whole squad was given a clean bill of health prior to departure and again after quick turnaround testing on arrival in Hambantota on Sunday, only for the more-sophisticated PCR process to show Ali was carrying the virus, according to the England and Wales Cricket Board.

Ali is due out of isolation on January 13, the day before the first Test starts in Galle. Woakes is being advised to isolate for a minimum of seven days.

England's players were hosed down with disinfectant spray after disembarking their charter flight, before being kept in 48-hour solitary quarantine in a hotel. They will undergo testing for a second time on Tuesday, with plans to begin training delayed until Wednesday at the earliest.

The 33-year-old Ali will be transported from the current team hotel to a private establishment in Galle from Tuesday. Being unable to take part in any training sessions until the day before the first test leaves the spinning all-rounder as a major doubt to start. 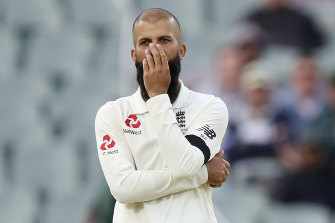 Moeen Ali will only come out of isolation the day before the first Test against Sri Lanka begins.Credit:AP

That is a blow to England, with spin sure to play a major role on one of the world’s most renowned turning tracks. Dom Bess and Jack Leach are the spinners likely to play if Ali is not selected.

Woakes has a better chance of building up to match fitness and will remain on site in Hambantota, where he will be monitored by medical staff.

The second Test starts January 22 and is also in Galle.

England captain Joe Root said before flying to Sri Lanka that confirmed cases of the coronavirus would not be a threat to a series that has been rescheduled from March, when England left Sri Lanka following the initial outbreak of the virus.

“It’s a really dangerous virus and wherever we will be, we will be in contact with it in some shape or form,” Root said.

“If so, we have to manage it as best as possible. We’re as best prepared as we can be for it and we’re fully aware of what we’re getting ourselves into. I don’t think (a confirmed case) will end in an automatic end of the tour.”

Related posts:
Basketball News:
Tottenham facing Sergio Reguilon exit with Real Madrid keen on buy-back clause
Jockey Luke Currie committed to riding Tassie star Mystic Journey in All-Star Mile lead-up runs
Morecambe 3-0 Colchester: Toumani Diagouraga on target in comfortable Shrimps win
MLB News:
NFL referee Sarah Thomas gets history-making Super Bowl assignment
What now for Drew Brees and the Saints? NFL experts debate their title window, future at QB
What time are NFL playoff games today? TV schedule, channels for Sunday’s divisional round
Recent Posts
This website uses cookies to improve your user experience and to provide you with advertisements that are relevant to your interests. By continuing to browse the site you are agreeing to our use of cookies.Ok