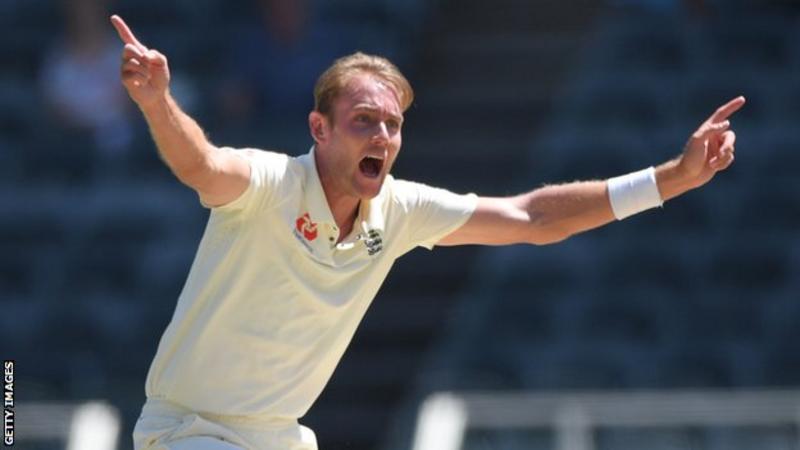 England pace bowler Stuart Broad says he is “worried” about not being able to produce his best form in front of no fans against West Indies.

The three-Test series, which begins on 8 July, will be played without spectators because of coronavirus.

“If you put me in an Ashes game or a pre-season friendly, I know which one I’ll perform better in,” said Broad.

“I’ve spoken to our sports psychologist about creating a mindset where I can get my emotions up.”

The Tests, postponed from June because of the pandemic, will be held in a bio-secure environment at Southampton and Old Trafford.

Broad, 34, said: “I perform at my best when the game is at its most exciting.

“I’ve got to make sure my emotions are where they need to be for a Test match. That’s something I started working on in early June.”

Media playback is not supported on this device

In taking 485 wickets in 138 Tests, Broad has become renowned for devastating spells that have turned matches in England’s favour, particularly at crucial moments in Ashes series.

“I thrive off the energy of something happening in the game or a bit of excitement, or with a big battle going on,” said Broad.

“I also know that there are certain scenarios that bring the worst out of me as a cricketer, and that is when I feel the game is just floating along and there is nothing on it.”

Broad joked that he may have to find motivation from a confrontation with a visiting batsman and risk the wrath of his father Chris, who is set to be match referee for the series after the International Cricket Council relaxed the need for non-neutral match officials because of current travel difficulties.

“Maybe I have to pick more of a battle with the opposition and bring my dad into things a bit more,” said Broad.

With the England players currently living and training at the Southampton ground where the first Test will be played, Broad said he had received some advice from his mother.

“My mum said I should take myself back to when I was 12, when all I wanted to do was play cricket anywhere I could,” he said.

“I have a coffee in the morning overlooking a Test match ground. If you’d have offered me that as a 12-year-old – minus the coffee – I’d have been buzzing.

“It is about being excited just to have the opportunity to play and have some fun. It gives you a bit of energy thinking like that.

“How many people would jump at the opportunity to have what we have? We shouldn’t need anything else.”

On Wednesday England will begin a three-day practice match among the players in the training group, before the squad for the first Test is named.