Medical experts say cricketers should be banned from using spit to shine the ball when play eventually resumes after the coronavirus crisis.

"Spitting on the ball would definitely be a risk, particularly given how infective the virus is and how long it has been found to survive on inanimate surfaces," said Richard Bradbury, an epidemiologist from Federation University in Melbourne. "I doubt it would be allowed." 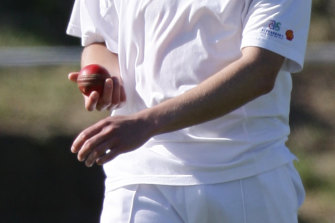 Sanjaya Senanayake, an infectious diseases specialist from Australian National University, said he would recommend "definitely no spitting on the ball" when cricket does resume, adding: "The virus has been found in saliva."

Fielders typically spit on the ball after each delivery to impart moisture, which can help it swing.

Rowland Kao, an epidemiologist from the University of Edinburgh, said spitting was "a classic risk of fomite transmission on a much higher level. So it would be a bad idea." Kao said that spitting on the ball also risked transmitting other diseases as well as COVID-19.

The England and Wales Cricket Board, which is drawing up plans for initially playing behind closed doors, said spitting on the ball had not been part of its discussions. "We are working on creating a medically sterile environment at grounds and around teams and how strict those are will be governed by medical advice," said Steve Elworthy, the ECB's director of events.

County players, meanwhile, have agreed to be furloughed by their counties and waived their rights to £1 million ($A1.98 million) in prizemoney this season.

The Professional Cricketers' Association and the 18 counties have reached a collective agreement that will see players furloughed and reductions in pay consistent with those taken by non-playing staff. Some counties have already agreed to top up players' salaries beyond the 80 per cent paid by the furlough scheme, but not all will be paying that level. Some can afford not to furlough players, while others have no choice due to financial constraints. Kent announced yesterday they had furloughed players, resulting in a 20 per cent reduction in salaries.

The £1 million in prizemoney is thought to be around half the amount on offer and further reductions are likely as tournaments are cancelled. The agreement is for an initial period of two months, with the season on hold until May 28, which accounts for seven rounds of the County Championship.