National white-ball captain Aaron Finch has sought the expertise of batting whisperer Andrew McDonald in a bid to snap his lean run ahead of a series in which Twenty20 market forces are heavily in favour of the second-string Australians. 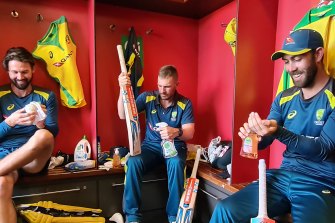 Kane Richardson, Aaron Finch and Glenn Maxwell are part of Australia’s T20 squad for the series against New Zealand.Credit:Cricket Australia

Even with several of its biggest names missing, the $9.17 million price tag on Australia’s squad is well over double that of the $4.25 million Kiwis, in the eyes of those in charge of assembling the playing rosters in the world’s richest T20 league.

If the respective worth of each side in the eyes of the Indian Premier League economy is any gauge of what happens on the field, then Australia should comfortably win the five-game series starting in Christchurch on Monday.

The market, however, can only be trusted to an extent. It has assessed Kyle Jamieson, a freshman at international level, as being five times more valuable than Kane Williamson, one of the best players to have ever come out of New Zealand. 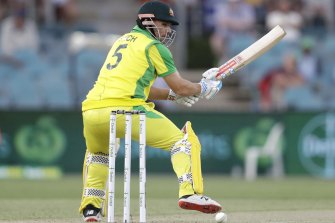 Aaron Finch is looking for form at the crease.Credit:Mark Baker

The Australians are certainly not underestimating the Black Caps, who were denied lifting the 50-over World Cup in extraordinary circumstances in 2019 and who this winter will be playing off in the World Test Championship final.

“They’re a well drilled quality side who do the basics well for a long period of time,” Finch said “They’re a world-class side that has success everywhere around the world, home and away. You can never, ever take New Zealand lightly. You have to come 100 per cent prepared.”

Finch has spent much of his training time during the 14 days of quarantine working on his technique with McDonald, after lean campaigns in the IPL and the Big Bash dented his hopes of being bought at last week’s auction.

McDonald is one of Finch’s closest confidantes from their days as teammates, then as coach and player with Victoria and the Melbourne Renegades, and now in the national side.

In the past, Finch has had issues with his stance and weight distribution pushing him back, leaving him vulnerable to being caught behind. His aim now, he said, is taking weight off his front foot.

“At times I can get flat-footed, my feet get planted and I struggle to move again. I have my initial movement then get a little bit stuck,” Finch said.

“Just de-loading that front leg a bit and allowing me to move. I’ve talked a lot and worked a fair bit with Andrew McDonald, who I go back to every time things don’t seem quite right and he seems to sort it out pretty quick.”

Though Finch would prefer to be playing in the IPL, he can see the benefits of extra time at home having been in hubs and bubbles since mid-August. The Australians were due to complete their two weeks of managed isolation and quarantine at 8pm local time on Sunday.

Finch and his teammates have spoken positively about the mood within the Australian camp during their two weeks of managed isolation and quarantine, due to finish 8pm local time on Sunday.

“It’s been a great feel around the group, everyone is nice and relaxed,” Finch said. “Everyone’s trained really hard. We’ve done a couple of big fielding sessions, everyone’s had really high intensity. Couldn’t be happier with how it’s going.”