Australia captain Meg Lanning says the men’s dominance in the Ashes this series has lit a fire in the belly of the women’s side to do the same after the squad was revealed on Wednesday. 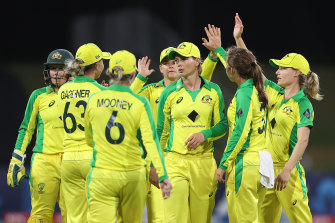 The series will feature three Twenty20s, three ODIs and a Test match and will kick off in Adelaide on January 20.

Speaking on Wednesday, Lanning said she had faith in the selectors’ decision to bring King into the squad and said the players were hungry to mirror the success of their male counterparts.

Lanning recently took a step back from cricket after the WBBL and missed Victoria’s opening WNCL matches to prepare for the Ashes and World Cup campaigns, which will likely be spent in long-term COVID-19 bubbles.

“It’s been great to watch the men do so well and really show that competitiveness and put the fire in the belly, so we are looking forward to it,” she said.

“The Ashes is extremely important, and we are going out there to win that series. That’s something we always want to do. Once we get through that, we will look towards the World Cup.”

Vice-captain Rachael Haynes was also selected despite missing the WBBL season and a lot of the India series earlier this year due to injury as well as the birth of her first child.

Haynes has been in great form for the NSW Breakers, with Lanning eager to get her back in the national side.

“She seems to have slotted back into cricket nicely. She’s been missing a few hours of sleep here and there, but apart from that she seems to be in a really good space and ready to go,” Lanning said.

“She is a professional, she knows how to manage and balance things away from cricket. She is really excited to get back into the squad and play in such a big series; no doubt she will be ready to go.”

The squad for the World Cup, which starts in March, will also be announced in the coming weeks.

Selector Shawn Flegler said practice games before the Ashes would help decide whether Ellyse Perry belonged in the squad.

“We’ve been really clear with the type of cricket we do want to play and what our batters need to be doing in T20 cricket,” he said when asked whether Perry was still one of Australia’s best 11 T20 players.

“We always want our players to develop and evolve and Ellyse is no different to any other player in our squad.”

Meanwhile, teenage star Stella Campbell was a shock omission from the Ashes squad despite taking figures of 7-25 in a WNCL match last week.

Campbell will instead play for Australia A, who will face England’s A squad across three T20s and three 50-over fixtures. Their series will run concurrently to the Ashes.