Risks of power failure inherent in the Gabba’s broadcast compound set-up are unlikely to be improved before the next Ashes series, as cricket authorities await more detail on plans for the stadium’s major upgrade to host the 2032 Olympic Games.

Sources have told The Age and The Sydney Morning Herald that the Gabba is the only major stadium in Australian cricket where the mains power supply at the ground is not sufficient to fire up the vast array of broadcast trucks and devices needed to beam pictures around the world. 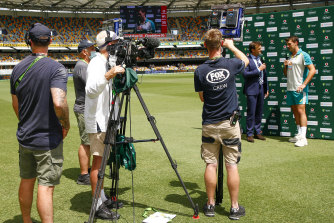 Primary and backup generators powering the global broadcast of the Gabba Test went down for about 25 minutes on day four.Credit:AP

That’s because the base power in the precinct is required to supply the Gabba’s light towers – one of which infamously went down during a Big Bash League match in 2019 – and the ground itself.

As a result, broadcasters draw their primary power supply from a huge, diesel-fuelled generator hired for the Test match, with back-up power meant to be derived from a back-up generator.

However, on day four of the Test match, the failure of the primary generator fused with the back-up generator, causing both to go down simultaneously and resulting in the total or partial loss of broadcast pictures and DRS for nearly 30 minutes.

All other grounds to be used for the Ashes – Adelaide Oval, the MCG, the SCG and Bellerive Oval in Hobart – will provide mains power as the primary supply for broadcasters, leaving a diesel-powered generator as the back-up.

This difference, which has caused considerable anxiety for the host broadcaster Fox Cricket in the past, was exacerbated during the Ashes Test by the vastly reduced crew of production and technical staff able to keep tabs on the myriad metaphorical balls being kept in the air throughout the match.

Cricket Australia were warned by Fox over several months that on a technical basis it would be safer to play the match elsewhere, but if it remained at the Gabba there would be “huge risks” inherent in the skeleton crew allowed into Queensland.

As it was, the match was played without Real-Time Snicko as an aid for the third umpire in deciding on DRS referrals, nor the automatic system devised to advise the match officials of no-balls bowled.

CA’s chief executive Nick Hockley has apologised for the loss of broadcast pictures on Saturday, but it is unlikely that the specific issue of the generators will be cleared up anytime soon.

The Gabba is due for a complete rebuild, that will also address the power supply, in time for Brisbane to host the 2032 Olympics. But major work is not expected to begin until around 2028 – after the next Ashes series is due to take place in Australia in 2025-26.

Broadcast requirements for the Olympics far outstrip those for an Ashes Test match. The rebuild has been flagged as increasing the Gabba’s capacity to 50,000 at a cost of about $1 billion according to the state’s premier Annastacia Palaszczuk.