Some teams like to think they can win anywhere at any time; Australia already have proof they can – and more. After Friday night’s epic victory, they are entitled to believe they can win from any position and with any number of stars out.

Come the third one-day international in Mackay on Sunday, it will have been 1428 days since Australia were beaten in the 50-over format. In that time, they have beaten six nations and won on every continent where top-level cricket is played.

There would not have been a rival side barracking against India on Friday night, for they know the aura around Meg Lanning’s side grows with every win.

In pulling off the great escape, Australia chased down the highest target they had been set during their 26-game winning streak and did so with Alyssa Healy, Lanning and Ellyse Perry dismissed cheaply and Rachael Haynes, their top run-scorer in game one, nursing a sore elbow on the sideline.

Such is the depth in their ranks that they had the luxury of using Beth Mooney – the leading run-scorer from last year’s Twenty20 World Cup – as an emergency opener. Mooney seized her opportunity with a match-winning unbeaten century but will probably move back down the order when Haynes returns.

All-rounder Tahlia McGrath’s opportunities have been scarce, but she was another who seized her moment. Rarely would a double of 3/45 and 73 not be rewarded with a player of the match gong.

That players on the fringe like McGrath and Darcie Brown in game one can have such a big impact is testament to the culture and environment coach Matthew Mott, his staff and the team’s leaders have created. 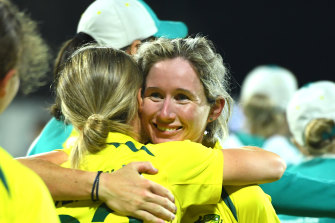 “That’s the exciting thing about this team – so many players injured, players who it wasn’t necessarily their day and then even the players on the sidelines who are missing,” McGrath said on Saturday.

“There’s so much talent in the group. The belief that, whoever gets the nod, they can play their role and get the job done. It’s a really special team to be a part of at the moment and really excited to be a part of what’s to come.”

Inevitably, Australia’s winning streak will come to an end. No team is unbeatable. A loss on Sunday may take the wind from the sails of CA’s marketing department but there are worse times to lose, with an Ashes series and World Cup to come in the new year.

Winning can mask the faults that are more critically examined in defeat. When Australia were beaten in the 2017 World Cup final, it prompted deep introspection and a vow to play in a fearless manner.

That courage to risk defeat in order to win was evident throughout the edge-of-the-seat run chase when Mooney found the balance between boldness and recklessness to keep the streak alive.

“That’s going to give us a huge boost, especially leading into that World Cup,” Mooney said. “We’ve been in that situation before against India, obviously in that 2017 semi, and they’re a world-class side.

“To be composed the whole way through that innings with someone like Tahlia [McGrath], who hasn’t played a lot of international cricket, shows the gains we’ve made in domestic cricket.

“And the importance of getting [new] people in this squad, involved in games and exposed to these kind of series. It’s pretty remarkable we came back from that to win . . . that will give us a huge amount of belief that pretty much anybody in this team can win us a game from anywhere.”

Whoever beats them will have to play close to the perfect game.