Ireland are in line to play a historic Test against Australia on these shores, in a plan that would help Cricket Australia placate some of its detractors on the world stage and relieve tension on the domestic front for chairman Earl Eddings.

The Sun-Herald and The Sunday Age can reveal moves are afoot for the Irish to play Australia in the 2022-23 summer, in what would be the first Test between the nations since Ireland was granted Test status in 2017. 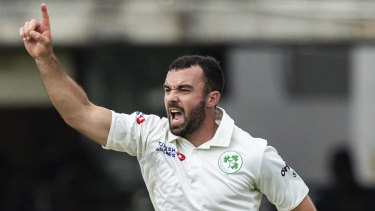 In the coming weeks, CA will announce the Test against Afghanistan, formerly slated to be held in Perth last November, will go ahead next summer in Hobart.

Afghanistan’s presence next season was all but guaranteed once an independent arbitrator this month ruled CA would have to give Seven West Media a further $3 million deduction from its broadcast rights fee if the Test did not take place.

If the Ireland fixture is rubber-stamped by the two boards it would result in Australia hosting a Test minnow in consecutive summers, giving its reputation abroad a much-needed boost after the postponement of the Test tour of South Africa. CA was widely criticised for the decision despite its concerns about strife-torn Cricket South Africa’s ability to deliver on a biosecurity plan to protect players from COVID-19.

It continued a trend of Australia withdrawing from games against smaller nations, having also pulled out of Tests against Bangladesh (2015, 2018 and 2020), while honouring commitments in England during the pandemic and allowing players to take part in the 2020-21 editions of the Indian Premier League. 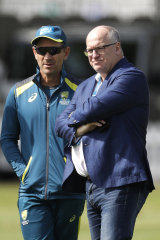 The mooted Test against Ireland presents an opportunity for Eddings to ease some of the uncertainty about his future in the top job.

Eddings is under fire from Cricket NSW, which has written to other states informing them it will not be supporting the chairman’s reappointment as an independent director on the CA board in October.

The CA board’s representatives on the nominations committee, Michelle Tredenick and John Harden, regarded as Eddings loyalists, are due to meet with state directors. Sources believe they will be arguing why the chairman and long-serving board member should be given another term.

The Melbourne-based boss needs support from four of the six states to approve his appointment by CA’s nominations committee, which means NSW and Queensland need only one more state to join them to topple Eddings.

Eddings, who multiple cricket figures say has the full support of his board, is confident he will stay in the job, according to a source close to him, while NSW is aware it may not be successful in having him deposed.

A person familiar with the issue claims CA has promised the Test against Ireland will be played in Tasmania, which would boost Eddings’ hopes of retaining that state’s support.

Frustrated by a dearth of games featuring the national men’s side, the island state wants a guaranteed international program in the coming years.

Western Australia’s allegiances have been the subject of intrigue among observers on the eastern seaboard. The subject of Eddings’ position will be on the agenda at the next WACA board meeting in about two weeks.

A source says the WACA has been supportive of him and CA, despite its dissatisfaction at not being given one of the four blockbuster Tests against India last season.

WA, whose state-appointed CA director, Lachlan Henderson, is up for re-election, has a seat on the four-person nominations committee. Queensland, one of Eddings’ fiercest critics, also has a say.

Harnden, as chair of the committee, has the deciding vote in any deadlock, effectively guaranteeing Eddings will be put forward to the states as an independent.