NASSER HUSSAIN: Virat Kohli made clever tweaks to his game but fell to Ollie Robinson again… given the demands on India’s captain, it is no wonder he has started playing some tired shots

It’s the sign of a champion cricketer that they’re always looking at their game, and trying to improve – even in a series where the matches come and go at such a rate.

So when Virat Kohli came out to bat on Thursday, it was noticeable how much thought he’d put into the difficulties he’s been facing in that channel outside off stump. There was clearly a trigger movement to get on off stump and cover it, and then try to leave everything outside his eyeline.

Batting in England against the Dukes ball is tough, as India are discovering, but Kohli had gone away, addressed an area of concern, and tried to overcome it. 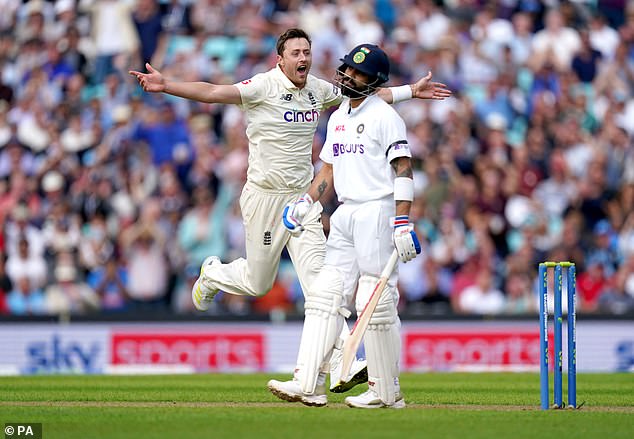 The upshot was that, for a while, England were unsure whether to carry on bowling in the channel, which became wider than usual because of Kohli’s trigger movement, or go for the magic ball and try to trap him lbw, because he was covering his stumps.

Early on, they went for magic twice, and Kohli just hit it back past mid-on. It was a real touch of class, and showed how the best players force opponents to rethink their plans.

If anything, England were a bit too full to Kohli, especially at the start of his innings, when there were too many floaty drive balls. It was as if they were still bowling a Headingley length, whereas at The Oval, you want to be about 30cm shorter than that if you want to hit the top of off stump. 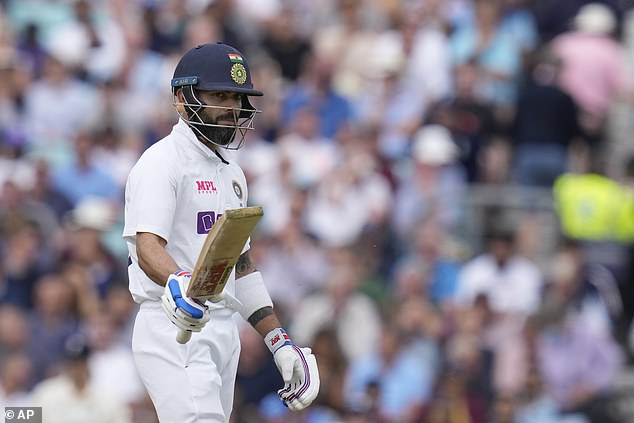 In fact, when Chris Woakes had Kohli dropped in the slips on 22, it was from a perfect Oval length, and after that England realised where they needed to bowl to him. Look at how they’d been getting him out all series – just below waist height outside off stump. Once they reverted to that, they regained a bit of control.

But Kohli will have been disappointed with the shot that proved his undoing. Ollie Robinson bowls a nice inswinger, and Kohli presumably thought he could work it round the corner. But he was surprised by the bounce, and ended up closing the face of the bat.

It was confirmation of the point Rohit Sharma made the other day. He said you’re never in when you’re batting in England. A wicket-taking ball might always be round the corner. And Kohli has now got to 50 in successive innings without going on.

That’s unusual for him. Before this series, he had 27 Test hundreds and 25 half-centuries, which is an astonishing conversion-rate. So England have done really well to limit him to a pair of fifties – a bit like the opposition used to do to Joe Root. The boot has been on the other foot these past few weeks. 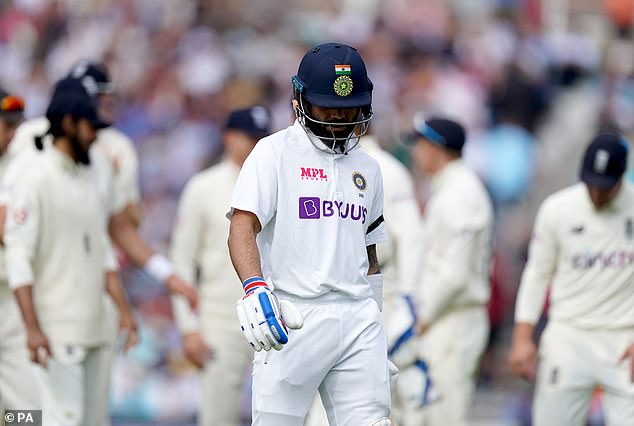 But Robinson has got him three times in this series, which is a great feather in his cap, and it may have something to do with his release point. Since the start of 2020, India average only 18 against bowlers with a release point above 2.15m – the likes of New Zealand’s Kyle Jamieson, as well as Craig Overton and Robinson here – so in that sense he’s exploiting a bit of a weakness.

And what will concern India – at least until Shardul Thakur connected with a few – was the repetitive nature of their dismissals. Basically, England haven’t had to rethink many of their plans.

You bowl a certain length to Rohit, but a bit fuller to KL Rahul. To Cheteshwar Pujara, you aim at fourth stump. To Kohli, you drag back your length a touch. And with Chris Woakes making a welcome return to the side, England had the perfect attack for these conditions.

Having said all that, we shouldn’t be too hard on Kohli. The amount of cricket that both these sides play – more any other teams in the world – can be exhausting, and Kohli bears the extra burden of captaining India, with all the demands that come with the job.

It’s no great surprise if he starts to play some tired shots outside off stump. The fact is, he still found time in an impossibly busy schedule to tinker with his game. And, for a while, it was a joy to watch.