Home » Sports News » If private equity gets roots into BBL, structure will weaken and fall

Nobel Laureate Paul Krugman joked (or did he?), “Not all private equity people are evil. Only some.”

The Herald reported earlier this month that Indian financiers are agitating for Cricket Australia to open up the Big Bash League to outside investment and allow teams to be bought by foreign interests. 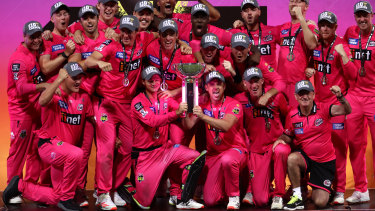 The Big Bash League should be kept in Cricket Australia’s hands.Credit:Getty Images

While comparisons may be made to the Indian Premier League, and how it benefits the BCCI, these fail to acknowledge that the BCCI keeps the IPL owners in strict check. Not through carrots, but with a big stick.

IPL owners are cognisant of the true controller of the BCCI: the Indian government. The BCCI and its 30-odd constituent State Associations are controlled by political operatives and affiliates, overwhelmingly from the ruling party of the day. Though democratic, the Indian government rules with an iron fist and would easily be able to bend any nonconformist IPL franchisee to its wishes.

Is CA capable of exercising such control? Australia’s courts will rule on anything and everything without fear or favour. Franchisees would not fear any repercussions or reprisals from CA or the Australian government. That is certainly not the milieu in India.

So, eschew the Indian money and stop dreaming of getting Indian players to play in the BBL. The BCCI haven’t released players in the decade since the BBL was established, and never will if it feels that it will disadvantage the national team.

Harsha Bhogle was cold-shouldered as a TV commentator for reasons unspecified. Sanjay Manjrekar still seems to be on the outer. The current crop of BCCI-approved commentators are highly deferential to the BCCI perspective and rarely critical. They obviously arrived at their own conclusions.

In short, Australia’s awareness and understanding of the nuances of the IPL, the BCCI, the Indian government’s stranglehold on the game is limited. CA is never going to be able to do that and, before long, foreign franchisees will be laws unto themselves. They will routinely agitate for (and, one fears, get) what is in the best interest of the franchise, and not the game.

CA should not even entertain the idea of selling out any BBL franchise to private equity. No one has the interests of cricket at heart more than our national body. It has some brilliant, energetic executives (Stephanie Beltrame and Anthony Everard immediately come to mind) with abundant experience and oodles of commercial nous. Nothing that private equity can teach them will enrich our game.

Dilution of its stake in BBL teams by CA will only lead to conflict, heartache and unwelcome polarity of interests.

Don’t take a chance. Be the last bastion of purity, CA. Don’t sell the very soul of our game. Do what you did to me and others who were circling around the newly-formed BBL in 2011, trying to buy a franchise at a bargain basement price.

Ask them to go fruitfully and multiply.

Darshak Mehta is chairman of The Chappell Foundation. A businessman, investor and philanthropist, he was an informal advisor to the Australian cricket team on three tours of India.