Home » Sports News » ‘I’ll be giving him a hug’: Shocked players back Paine after scandal

Test opener Marcus Harris says players were in shock after being told Tim Paine was stepping down as captain last week when news of his sexting scandal became public.

Harris, who has played all 10 of his Tests with Paine as skipper, backed the Tasmanian to remain in the XI even though he was no longer the captain, saying he remained the best wicketkeeper in the country.

Players were officially told the news shortly before Paine fronted up to the cameras in Hobart on Friday afternoon to announce his resignation, although rumours were swirling through Australian cricket that morning.

It has left the side without a leader a fortnight out from the start of the Ashes. The entire squad is due to meet next week after members of the Twenty20 World Cup team and the Victoria- and NSW-based players complete two weeks of quarantine on the Gold Coast.

It remains unclear if Paine will keep his place in the side but he is the only wicketkeeper in the Ashes squad named before his resignation as captain. Paine is in Hobart playing for the Tasmanian second XI in his first competitive game since neck surgery.

Harris has backed Paine to overcome the mental and emotional challenges from the scandal to take his place in the Test team. 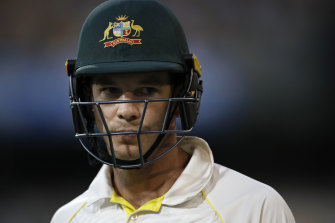 Marcus Harris says players were in shock after learning of Tim Paine’s resignation as Test captain.Credit:Getty

“We found out half an hour before you guys, so there wasn’t much time to properly digest it. But yeah, it was a shock, but Tim’s obviously been a great leader around the group. He’s always been really good to me and my family,” Harris said on Wednesday morning.

“Our hearts went out for Tim and [wife] Bonnie and the kids and his family. And then yeah, obviously CA are going to have to work out who leads now but – I think knowing Painey, knowing his character – he’s a pretty strong and resilient bloke. So if anyone can get through it, I’m backing Painey to be able to get through that.

Paine has not addressed the team but players have been in contact with their former captain, who led the side out of the tumult of the sandpaper affair in 2018.

“Painey is a very popular member of the group, and he was the skipper as well. We’re looking forward to him getting up here in the next week or so and getting on with cricket,” Harris said.

“When you have things going on, sometimes the best thing to do is actually be out in the middle and playing cricket and taking your mind off things. Hopefully, in the next week or so we can get on with it.”

Shane Warne has called for Paine to be dropped from the side while former selector Mark Waugh is doubtful the gloveman will remain.

Harris, however, wants Paine to stay in the side, pointing to his strong performances last summer. Only Adam Gilchrist averages more than Paine with the bat as a Australian Test wicketkeeper, while his average of nearly 40 in his past two series points to a player more than capable of holding down No.7 in the batting order.

“He’s done a really good job in the last few years, under tough circumstances. And I think you’d probably have to argue that he’s still the best gloveman in the country,” Harris said.

“And he still played really important innings last summer against India, so I know he’s got the support of all the players.”