It can be tough to know how much stock to put in who we see before us when it comes to assessing wider “greatness” in sport. The term itself is often a misnomer when applied in real-time, branded recklessly without considerations of circumstance, or even bias. And there have been plenty of the latter over these last three days.

Yet on Monday, as India rounded on victory in the second Test, with England 53 for three, 429 runs away from an unlikely victory and an even more unlikely two full days of batting away from safety, Ravichandran Ashwin offered both immediate and historical context. His fifth Test hundred of 106 out of India’s second innings ground the tourists into the dust, putting his team on the cusp of a comprehensive win to square the series 1-1 with two matches to come.

The 34-year-old is now out on his own, a five for 43 in the first innings making this the third Test in which he has picked up both a five-wicket haul and a century. He leaves a group of two-timers that includes Gary Sobers, Jacques Kallis, Shakib-al-Hasan and Mushtaq Mohammad. Only Ian Botham, with four, sits ahead of him. There Ashwin is, sat in his own space between the very best all-rounders.

READ MORE: The Anderson spell that set up a famous victory

A sixth wicket of the match picked up in the evening, with Rory Burns caught at gully, has him sleeping on a potential spot with Shakib, Botham, Imran Khan and Alan Davidson as the few to register 10 and a triple-figure score in the same game. And even the most partisan of England fans will sense that is in the offing. There lies another box-tick of his worth – that joining such noble company feels inevitable.

Ashwin’s assertiveness confirmed India’s dominance while quashing faint English hope. Perhaps as damaging to visiting morale were the three chances that were not taken, two of them off Stuart Broad who was eventually wicketless for his 20 overs of graft. He was dropped on 28 by Ben Stokes at first slip in Broad’s first over of the day, then 56 by Ben Foakes standing up, before a stumping chance also fell by the wayside when he had 70.

Those missteps were out of sync with how England started the day. Just as they did by avoiding blaming the pitch, they kept focus on what they could control. For the first hour of day three, they achieved that through some sharp work with the ball and in close, picking off the first four of India’s nine remaining second-innings wickets for just 32 added to the overnight lead of 249.

They were set on their way with a slapstick run out when Cheteshwar Pujara jarred his bat into the ground, seeking to return to his crease after coming down the track to defend a ball that was smartly gathered and released by Ollie Pope at short leg. A couple of made stumpings from Foakes saw off Rohit Sharma and Rishabh Pant, making him the first English wicketkeeper since Alan Knott against Australia in July 1968 to affect two in a single Test. On his 28th birthday, no less.

And when Moeen Ali (four for 98) accounted for Ajinkya Rahane and Axar Patel for his first two, England were reasonably chipper at being “just” 301 behind. So began an enthusiasm-wilting partnership for the seventh wicket.

To know it was between Virat Kohli and Ashwin might actually lead you down the wrong path. This was something of a role reversal. Kohli acted as the scientist, stemming the flow of dismissals with faster calculation of length than anyone else. Ashwin, armed with a license to sweep, was the axe-wielding ace of the two-piece, carving 56 of the 96 between them.

It took a neat bit of bowling to part them, Moeen changing his angle to around the wicket, pitching the ball on middle-and-off to trap Kohli in front of middle-and-leg for a fine 62 – a 52nd score over fifty in the format off the back of a duck in the first innings. That, too, was administered by the off-spinner, who went on to take a fourth of the innings and 189th of his career when Kuldeep Yadav was also pinned on the pads. 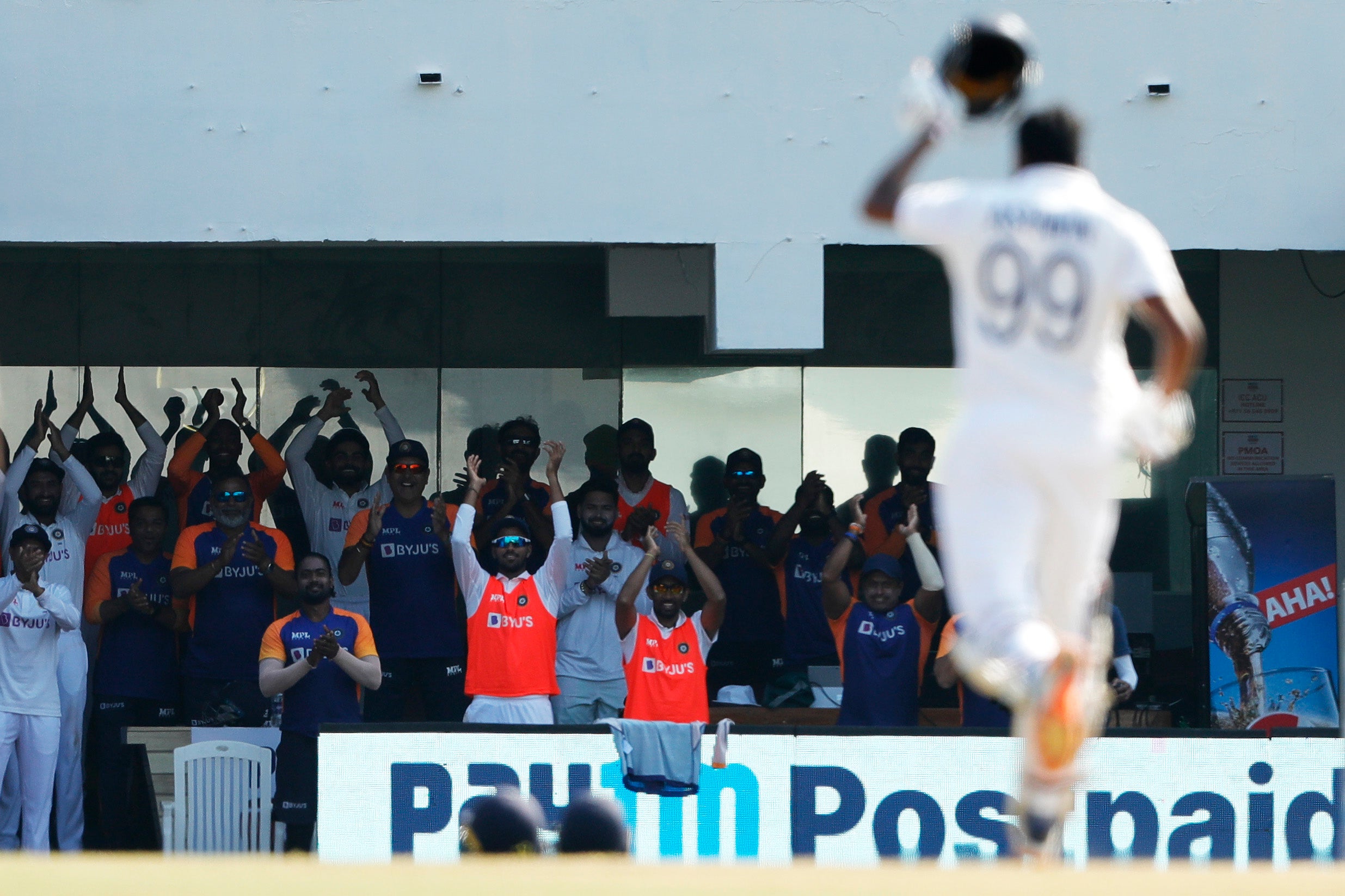 There was no great change for Ashwin, though, just a greater onus on his job as the primary run-scorer, even if there was no real need with India 405 up. But nor was there any pressure to declare with a personal milestone on the horizon.

Greater urgency came when India were nine down – Leach snaring Ishant Sharma for his fourth – with Ashwin 23 away from three figures. And as he farmed the strike from No 11 Mohammed Siraj, boundaries became his main currency. Three sweetly timed fours and a towering six off Moeen took him to 97. Facing up on 99, he charged wildly to skew a hack over the slips for a 15th boundary to see him to a first century at his home ground, from 134 deliveries.

At that point, Siraj was allowed to have his own fun, clubbing Leach into the stands for two sixes before Ashwin bashed Stone onto his own off-stump to bring India’s innings to a close.

He was allowed to rest after the change of innings, brought on after five overs rather than given the new ball. Patel took it instead alongside Sharma, and it was the leftie who began the feast on what was left of a weary England carcass by straightening one into Dom Sibley (three). Ashwin then took out Burns, who at least limited his run of consecutive ducks to two with a frenetic 25, before Patel ensured Leach’s stay as nightwatchman ended well before the sun set. 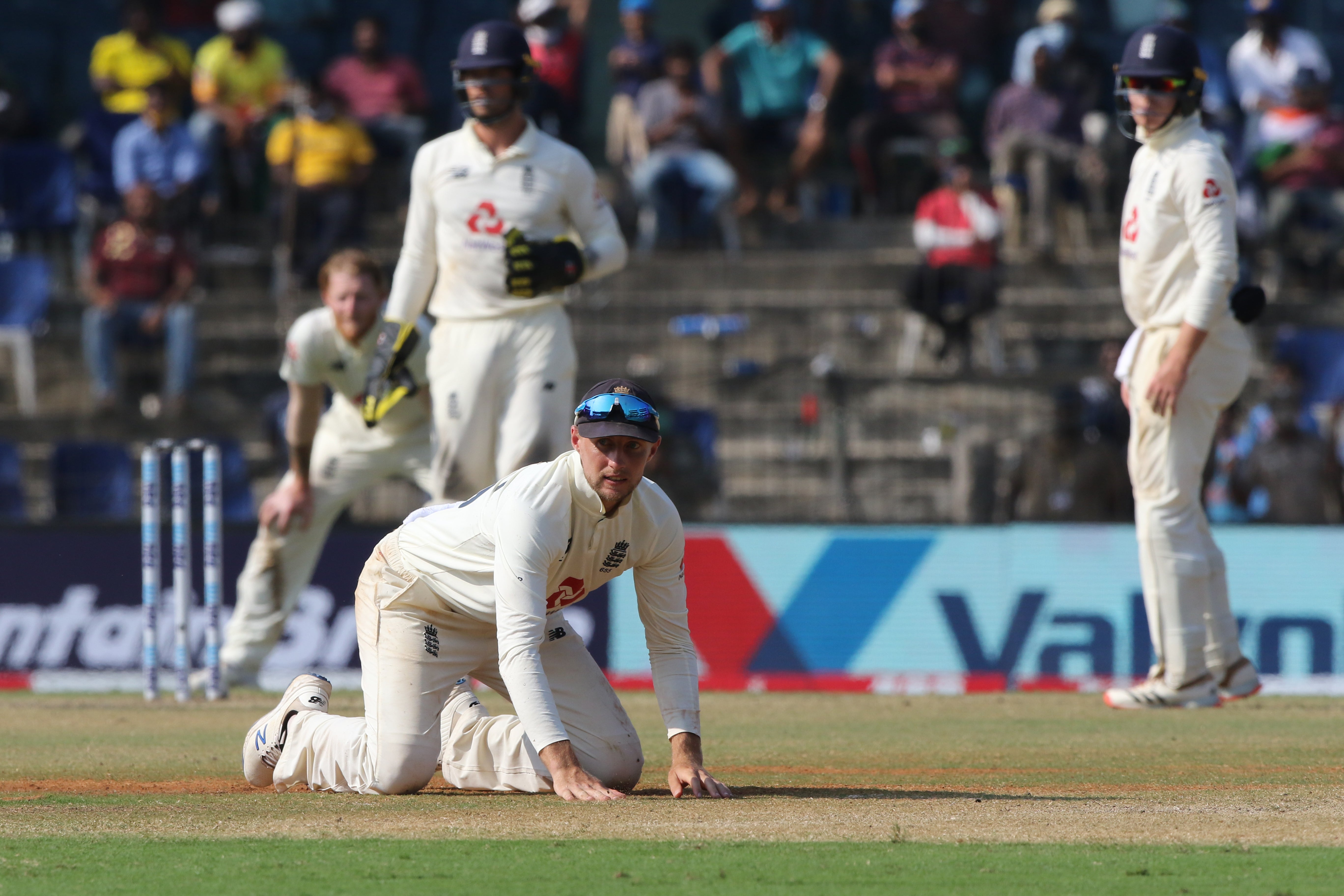 It meant visiting captain Joe Root came out an over later than he would have done. He was lucky to see out the day, profiting from a spurious ‘not out’ call to an LBW on the field. The decision was upheld on “Umpire’s Call” with regards to the impact onto Root’s front-pad just outside an off stump clearly visible on the video review. The ball also looked like it clipped the stump on the way through to Pant without knocking off the bail.

India were annoyed as they walked off at the end of the over with Dan Lawrence not out. A dissatisfaction short-lived, no doubt, given how close they are to confirming the game as theirs. The end is nigh, an equaliser surely just a couple of Tuesday morning hours away. Just as England did in the first Test, India are due to win the second having exerted complete control over proceedings.