Home » Sports News » India, what are you waiting for? Why cricket needs a women’s IPL

This week, a privately funded women’s Twenty20 tournament kicked off in the UAE.

The players are being well paid (about $20,000 for two weeks each), the prize money on offer is rich, and the playing stocks are drawn from an impressively wide selection of the world.

But with due respect to the FairBreak Invitational 2022, in which Australians such as Nicola Carey, Grace Harris, Georgia Redmayne and Elyse Villani are taking part (and available to watch on beIN Sports in Australia), this is not quite the women’s T20 event the world is waiting for. 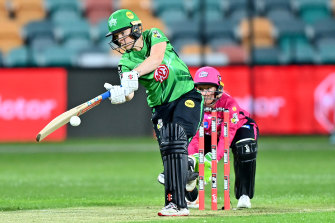 Elyse Villani is among the Australians playing in the FairBreak Invitational. Credit:Getty Images

Instead, the game’s richest board, India, continues to hang back on launching a full women’s IPL of its own. Since 2018, the BCCI has elected only to play a “women’s T20 Challenge” comprising three teams and four matches.

Earlier this year, as FairBreak’s organisational efforts were ramping up for the tournament, the BCCI did discuss the possibility of “making an effort” to play a larger scale women’s event from 2023 onwards. Around the same time, numerous Indian cricketers dropped out of FairBreak, including the national T20 captain Harmanpreet Kaur.

But any such plans were balanced against questions about how difficult it might be to “find a window” to hold the tournament, and that it may not be possible to do so at the same time as the men’s IPL. It still sounds a bit too hard.

These sentiments were consistent with the views of a board that has shown scant interest in genuinely investing in the women’s game, despite a surfeit of cash with which to do so. And after all, the president Sourav Ganguly had previously stated that the expansion of the T20 Challenge should take place in 2022. The outcome? No change to the tiny exhibition format this year.

Some of the opinions expressed in opposition to a full WIPL revolve around old and hugely outdated attitudes, about the women’s game not being a financial draw, or that the Indian national team should have to win a World Cup before the BCCI “rewards” its players with an IPL.

These views stand in sharp contrast to some pioneering work done in Australia and England in particular, where the WBBL and the women’s edition of The Hundred are now fixtures on the domestic scene. The collective view of players and administrators alike was summed up by Ellyse Perry.

“I actually think it is even more so an encouragement for other boards to seriously look at introducing professional women’s T20 competitions, particularly the BCCI and a full IPL for women,” Perry told The Age and The Sydney Morning Herald last year. “Because there is a wonderful opportunity there and it’s increasingly becoming a great commercial opportunity for cricket boards to bring in a women’s side of the competition.

“Not just from a spectacle or entertainment point of view, but also because growing the game in their country and getting more young girls playing cricket and being involved is so important to the viability of the sport in the future.”

For now, numerous key figures in the women’s game – such as Alex Blackwell, Lisa Sthalekar and FairBreak’s founder Shaun Martyn – have lost patience in waiting for India to do something meaningful. The outcome has been the FairBreak Invitational, a tournament whose organisers fully acknowledge it may have a limited life if its major effect is to spur the BCCI into action.

Certainly, this time next year, India’s administrators will have even more cash than usual to redistribute. The IPL broadcast rights are expected to fetch somewhere in the region of US$1 billion per season when they go to market in June.