Home » Sports News » Jhye-ving in the fast lane: How a love of cars got Richardson back in the groove

Jhye Richardson can’t remember exactly when his love of fast cars started nor does he understand much about how they work. What he does know is the importance they played in getting him through the dark days of rehab back into the baggy green.

Richardson is a speed demon. He likes things fast, be it his bowling, his cars or his gaming. As far as interests outside of cricket go, the latter two may not set him up for life after cricket in the manner of a vocation or tertiary qualification, but they have given him a purpose away from the game.

It’s hard to argue it has not benefited his cricket. On Thursday, 1046 days after his last appearance in the Test team, Richardson will almost certainly make his Ashes debut, one which should have happened more than two years ago.

The West Australian speedster was ready to fly in early 2019 only to have his wing clipped. There is no good time to get injured, but months before dual World Cup and Ashes campaigns is as bad as it gets. 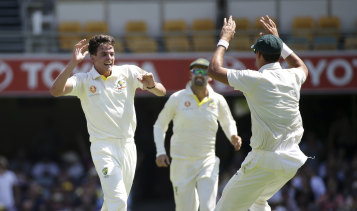 Jhye Richardson is expected to make his Ashes debut in Adelaide on Thursday.Credit:AP

Initially, the goal of getting back tempered the disappointment, but after both marquee events were ruled out the reality of life on the sidelines hit home.

Recovery from serious injuries, athletes often say, is not linear. Two steps forward, one step back. Doubts creep in. Will I get back to where I was? Richardson was no different.

“It was about understanding that process, so if there was a scenario where I was taking a step backwards it wasn’t the end of the world knowing I would come back better,” Richardson told The Age and the Herald. “It was more a mental understanding to make sure I was in the right head space at the time.”

This is where Richardson’s passion for cars comes in. Some car lovers are in it for the image, others love looking under the bonnet and getting their hands dirty. For Richardson, it’s the escape from cricket it provided and a sense of community.

“There was a scenario the other day, where I was at a car meet where guys were rattling off things and I had no idea how to keep up with the conversation,” Richardson said.

“It’s more a learning thing – that’s the beauty of it. Someone might have the same car as you, but gone down a completely different route and learning about the way they’ve gone about it can give you ideas how you can go about it too.

“That’s the best way – the learning aspect for me. Because I don’t know much, it’s quite fun trying to gather an understanding from people who know a lot more than I do.”

Among Richardson’s prized possessions are a Mercedes C63 and a Mitsubishi Evo 10, the latter with a fully rebuilt wide body kit, which he says is rare in Australia. “That’s pretty mental,” Richardson said.

Recently, he sent his Mercedes to race engineers, specialising in Euro and exotic vehicles, to maximise power without upgrading turbos.

“I like not so much driving really fast but more about when people ask you, ‘Can [you] say what you’ve done?’ And, ‘How fast it is?’” Richardson said.

Richardson’s contract with Cricket Australia precludes him from hitting a racetrack and going full throttle so, for now, he will have to be content with just bowling at 145 km/h-plus.

“For me, while I’m playing cricket it’s more about making the car my own, knowing what it’s capable of rather than really testing it out,” Richardson said.

“There’s a reason why we’ve been asked to not go to racetracks and engage in motorsport and that’s purely a safety thing.

“We know how dangerous cars can be. As great as it would be, it’s about looking after the career at the moment.

“There’s always a time and place. I take good pride in not having lost a demerit point yet.”

His other great pastime is Esports. This year, he became a brand ambassador for Perth-based Esports outfit Ground Zero Gaming, which competes in Richardson’s favourite game, Rocket League, a vehicular soccer video game with five-minute matches.

“It was something else to think about, something else to concentrate on and a bit of fun,” Richardson said. “Having fun and enjoying things is really important. Those two things provided a distraction away from cricket.”