Usman Khawaja has made himself irreplaceable in the Test team after a second immaculate century put Australia into a winning position against England at the Sydney Cricket Ground.

The regal left-hander followed his joyous first innings’ hundred with a dominant, unbeaten 101 on Saturday as Australia set England a record-breaking target of 388 to win the fourth Test.

England will resume on Sunday at 0-30, their best opening stand of the series, after Australian captain Pat Cummins took his time declaring at 6-265.

By then Khawaja reached three figures and exciting young all-rounder Cameron Green had regained his touch with an ever more dominant 74.

The best fourth innings run chase at the SCG is Australia’s 2-288 against South Africa during 2005-06 and for England it’s 5-194 more than a century earlier.

Khawaja’s supreme performance in his return Test after a two and a half year absence, replacing COVID-grounded Travis Head, took his run tally for the match to 238, fifth on the list of run-scorers for the series. 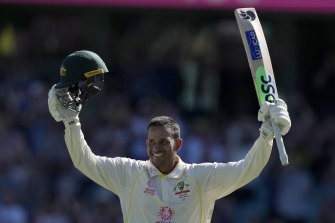 Usman Khawaja celebrates his second century in the SCG Test.Credit:AP

While it’s admirable that chairman of selectors George Bailey wants to invest in a long-term opener, Khawaja, 35, has done twice in one Test what Harris, 29, has failed to do in 14 – scored a century.

Saturday produced another unimpressive dismissal for Harris, reaching for a full, wide ball from spinner Jack Leach to be caught behind driving.

Head will slot straight back into the number five position for the fifth and final Test in Hobart after a dynamic start to the series, but Khawaja must replace Harris as David Warner’s opening partner.

Khawaja has succeeded at the top of the order in a previous incarnation. During his 45-Test career, Khawaja has opened seven times for Australia, scoring 484 runs at an average of 96.8 with two centuries.

This is no surprise given that Khawaja developed as a strong back-foot player, making him suitable for the top three in the batting order.

Australia’s next Test commitments are scheduled for Pakistan and Sri Lanka in the next six months. Khawaja’s calm experience at the top of the order would be most welcome if he can retain this sort of touch.

And he has greatly improved against spin bowling, as he showed again on Saturday with the disdain he reverse-swept and slog-swept Jack Leach and Joe Root.

Khawaja shone in the bright sunshine as the forecast rain and storms failed to materialise, giving the Australians plenty of time to push for victory if the weather continues to hold.

Australia’s position wasn’t always so comfortable. Green joined Khawaja at the crease with the score 4/86 and Australia’s lead 208.

It proved a bonus partnership in all sorts of ways as they added an ever more sparkling 179.

For Khawaja it reinforced his quality. For Green it restored his confidence after what has been a fine series with the ball but miserable summer with the bat. His latest innings was more than he had scored collectively in his previous five.

England will be hoping the weather will come to their aid given the battered state of their Test team.

Tenacious century maker Jonny Bairstow and wicketkeeper Jos Buttler, who struggled to hold his bat on Friday, were sent for x-rays following painful blows to the hand while Ben Stokes was sent for a scan on a side injury suffered while bowling earlier in the Test.

As such Buttler and Bairstow, who has also kept for England, were both unable to take the gloves on Saturday, prompting the call up of Ollie Pope off the sub’s bench to fill in.

David Warner went early, caught behind for three from ever impressive paceman Mark Wood, whose figures on this tour have not done his whole-hearted bowling any justice.

Wood also had Marnus Labuschagne, 29, nicking off again, continuing to win that battle, while Leach had his best day of a difficult tour.

The left arm spinner removed Harris, bowled Steve Smith for 23 when he became too ambitious attempting to cut an arm ball, removed Green with a skied slog-sweep trying to hit another six, and had Alex Carey (0), caught behind first ball when he was needlessly sent out ahead of the declaration.

The main talking point before Khawaja and Green went on the rampage was Harris, and former Australian opening batsman Greg Blewett left no doubt where he stood.

“He’s now played 14 Test matches and averages 26,” Blewett said on Channel 7. “I mean, the fact that Australia are winning helps, but I think if you’re going to be absolutely ruthless then you’ve got to keep trying to improve your side, which everyone should be.

“You know, Usman Khawaja coming off a magnificent hundred, he’s opened the batting before, I think that’s the way they’ve got to go.”