Justin Langer has issued an ominous warning for Joe Burns that runs are the "currency of value", as Australia search for answers after another "disappointing" top-order batting performance.

Burns may have played his last Test after making a panicked four in the second innings of the Boxing Day Test, continuing the opener's wretched summer with the bat.

The Queenslander has only 125 runs at 10.4 in 13 first-class innings. His only knock of substance has been an unbeaten 51 in a successful team run chase in the Adelaide Test. 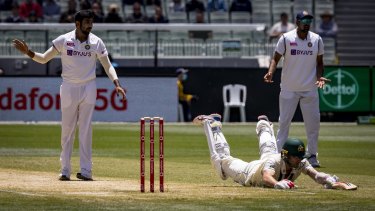 "Our players know that performance … runs are the currency of value, you have to keep performing to be selected," Langer said on Tuesday.

Opener David Warner appears set to rejoin the side in the third Test, having missed the series against India so far because of a groin injury. Warner batted well in the nets on Sunday, and is expected to lift his training intensity ahead of the next Test, beginning January 7.

"Davey’s going really well. We know what a warrior he is. He’s doing everything in his power," Langer, the Australian coach and selector, said on Fox Cricket.

Victorian Will Pucovski, on the mend from concussion, is another option but has not batted in a match since he was hurt in an Australia A game earlier this month.

Travis Head also finds himself under pressure after middling scores of 38 and 17 in Melbourne, the latter ending when his temperament was challenged outside off stump and he was lured into an unnecessary drive. Head's inability to step into his drives has been questioned, although former Australian opener Chris Rogers said the issue may be more to do with "shot selection".

The home team failed to score more than 200 in its first innings in Adelaide and Melbourne, leaving Langer concerned.

"It was pretty disappointing. It was the same in the first Test in Adelaide and really the first innings here," he said.

As Langer made his feelings clear, Steve Smith, having found his "hands" heading into the summer, is now searching for his rhythm after his batting woes continued in Melbourne.

Smith has 12 runs in four innings through the series, although his unbeaten one not out in Adelaide was in a second-innings run chase, but it's been his dismissals in Melbourne that have rocked the cricketing world.

Spinner Ravi Ashwin, having had Smith caught at slip in Adelaide, maintained the pressure in the first innings in Melbourne when he had Smith snapped up at leg gully for a duck – the first time he had been dismissed without scoring in 51 Test innings.

The tourists have strangled the Australians with their tight stump lines, and that was on show on Monday when Jasprit Bumrah found Smith's leg stump, the Australian having shuffled too far across to deal with the Indian quick's nagging line.

Smith has tormented many an attack with his leg-side play but the tourists have discovered a method that has not only captured wickets but restricted the Australians to a run rate of less than three an over. As attention turns towards the third Test, Smith – named the International Cricket Council’s Test player of the decade – said he needed to adopt a more aggressive mindset.

"I guess I am just trying to find some rhythm, that's the main thing. I think I probably haven't played Ashwin as well as I would like, to put him under a bit more pressure," he said on SEN.

"I sort of let him dictate terms and that is something I have never let any spinner do in my career. I have taken it them and been a bit more aggressive and made them change things. I haven't allowed that to happen, probably because I am just searching for just being out for long enough. So it's kind of a two-edged sword in a way but I think I just have to have the confidence to take it on and play my game."

Smith's unique technique has been the source of much interest and dissection, and he provided insight into his two different approaches, having taken some inspiration from South African great, AB de Villiers.

"I have got one (stance) where I just move my back foot and let my front foot come to wherever the ball, or where it needs to go. Then I have the other one where I do the double two feet," Smith said.

"That's more if the bowlers are looking to bowl at my stumps or if anyone has the ability to bring the ball back into me. I started doing that I think in Dubai on a low wicket where the ball was, there was a bit of reverse back into me, and I thought – I did look at AB and think, gee: 'He gets into a really good position and his bat does come down on a nice, straight pane'.

"Whilst my bat still goes out to point, I still feel that is when I have my best access straight. That's when I started doing that and that has just stayed in play for when it's needed."