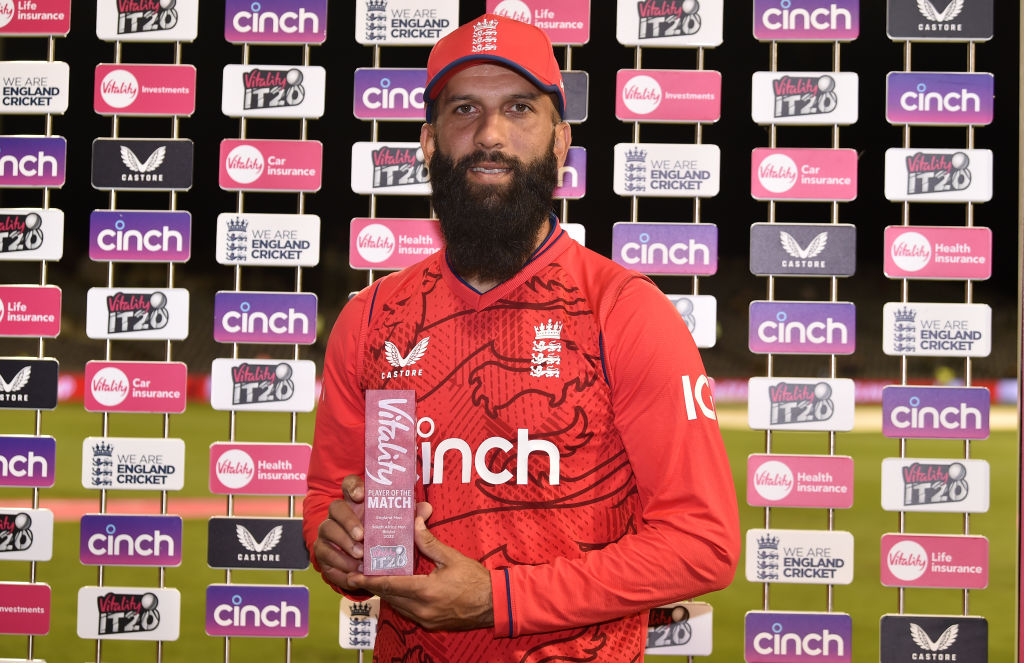 Moeen Ali says he is ‘proud’ to have scored England’s fastest-ever half-century in T20 cricket but does not expect to hold the record for very long.

Moeen smashed a 16-ball fifty and shared a 106-run partnership with Jonny Bairstow to propel England to 234-6 in the first T20 international against South Africa in Bristol.

Bairstow was dismissed off the penultimate ball for a brilliant 90 from 53 balls as his stunning summer continued.

England lost openers Jos Buttler and Jason Roy in the powerplay but recovered superbly to post their second-highest T20 score, with Dawid Malan also contributing with 43 from 23.

South Africa slipped to 7-2 and 136-5 in reply before Tristan Stubbs briefly threatened to take the game down to the wire with a brutal 28-ball 72, including eight sixes.

But England were always ahead in the game as the expensive Richard Gleeson took three wickets, Adil Rashid and Reece Topley both claimed two and Chris Jordan conceded just 30 runs from his four overs.

‘It means a lot, there are guys in our changing room who score quickly and now I can brag about having the fastest fifty in T20 cricket for England. I’ll go in the dressing room and give it the big one,’ Moeen said with tongue in cheek.

‘It’s something great to be proud of, but I’m sure it will be broken soon. This was a nice-sized ground for someone like myself, who isn’t the most massive hitter of a ball like some of the boys.

‘You can hit sixes here, you pick the bowlers you fancy and go after them. I just had a look at a couple of balls then played my shots.’

Moeen was quick to praise Bairstow’s efforts, with the Yorkshireman taking advantage of three dropped catches to make 90 and continue his brilliant form.

‘Jonny is someone I’ve always enjoyed batting with, he’s quite busy, strong, powerful and the way he batted tonight was very entertaining,’ Moeen said. ‘It was great to be at the other end.’

All-rounder Moeen also hailed Jordan as the pace bowler showed his skills at the death to concede a meagre eight runs from the 18th and 20th overs combined.

‘CJ closed the game out for us,’ Moeen added. ‘He’s a very, very important player and has experience all around the world.

‘He’s had a couple of difficult years in the role he’s been given but this summer he has been fantastic. We know how good he is, his pace is up and he’s a fantastic death bowler.’

Having underwhelmed somewhat during their recent one-day international series against South Africa and India, England were ‘itching’ to produce fireworks in the first of three T20s against the Proteas.

Moeen Ali smashes it for six and what a catch from a fan in the crowd! ð#ENGvSA pic.twitter.com/D0IAoZoqE5

White-ball captain Buttler said: ‘The way the guys stood up and took responsibility throughout that innings – Malan, Bairstow and Moeen Ali – was fantastic. It was great to watch.

‘We have been itching for that kind of performance. We scored over 200 against India at Trent Bridge and again here so really impressive.

‘We knew it would be a tight game. It is a small ground and a great wicket. To pick up early wickets again was crucial and I thought the 18th over Chris Jordan bowled was brilliant and shifted the momentum.’

England and South Africa now head to Cardiff for the second T20 international on Thursday night.