The Moonee Valley Racing Club will call for a review into Racing Victoria’s mandatory “nuclear” scan for internationals wishing to compete in the spring carnival, once this year’s carnival has been run and won.

That comes after Irish trainer Aidan O’Brien doubled down on his view that the scintigraphy scan – introduced to reduce the number of deaths in the Melbourne Cup – is too invasive on horses. 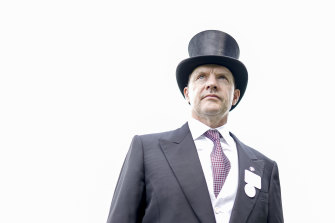 “You have to inject this nuclear dye into them and a person can’t go into them for four days – and they are meant to race after that?” O’Brien told the Racing Post over the weekend.

“Obviously it’s unfortunate what happened to our horse [Anthony Van Dyck, who died in last year’s Cup], but [Racing Victoria] must be under huge pressure from the ‘antis’ or whoever to demand that sort of thing.”

Alastair Dwyer, general manager of racing at the MVRC, said his club would ask RV after the spring to review its position on the scintigraphy, which has impacted the club’s marquee race, the Cox Plate.

The Cox Plate will have just two European contenders this year, one of which is now Australian-trained.

“It’s clearly the main [sticking point] for the likes of Aidan O’Brien, who provides us with the majority of our runners and the trainer we target the most, along with [son] Joseph [O’Brien],” Dwyer said of the scintigraphy.

“The VRC and RV in their wisdom want to keep it for the Melbourne Cup – we’ve got no issue there – but it’s had a significant impact on the Cox Plate and once these COVID issues dissipate, it’ll be the first one on our list to have a conversation with RV about.”

Meanwhile, Chris Waller says there will be an onus on trainers who imported horses on one-way tickets from Europe via Mickleham to make sure they’re fit enough to run during the spring carnival.

Those horses, such as Sheraz and Surefire who have joined Waller’s stable, were not subjected to scintigraphy scans before travelling to Australia and – unlike those horses who have come through Werribee – are eligible to compete in the Hotham Handicap just three days before the Melbourne Cup.

They were also not subjected to a deep dive into their prior injury history. Horses that have had a previous major fracture or orthopaedic surgery are excluded from travelling and entering Werribee regardless of their current health and soundness, but that requirement does not apply to horses arriving early via Mickleham.

RV argues those horses who arrived via Mickleham in June or July have had at least eight weeks to acclimatise to Australian conditions, unlike those arriving via Werribee, but Waller – who was involved in the extensive review into the rate of injuries sustained by internationals during the spring – said he is conscious some horses may need more time.

“[Sheraz] is their property as far as I’m concerned. If they want to check him every week, go ahead and do it because you’d hate to be the responsible one for trying to find a loophole if something went wrong. I think you’d feel terrible, and we’ve got a responsibility to the industry to make sure everything’s safe.”

The Victoria Racing Club will also be keeping an eye on how the first year of restrictions plays out before making any proposals to change the guidelines.

All horses intending to compete in the Melbourne Cup, including those locally trained, will need to complete a standing CT scan between October 16 and 28. No horse is permitted to have two starts between the scan and the Cup; for example, any horse wishing to run in the Geelong Cup and then the Hotham must have their scan done after the Geelong Cup.

While the VRC is comfortable with the quality of horse talent arriving in Melbourne, Waller is hopeful European trainers will be more inclined to travel to Australia next year.

“We need the best horses coming from around the world every year. We’ve probably dented their confidence a little bit,” he said.

“They’ll come in droves next year, I’m confident of that.”