Melbourne Racing Club will aim to host as many fans as possible at its Zipping Classic meeting in late November after putting a line through crowds at its Caulfield Cup Carnival.

The club conceded defeat on hosting racegoers at next month’s three-day carnival in an email to members on Monday afternoon, a day after the Victorian government ruled out crowds at major events before an 80 per cent double vaccination rate for the eligible population. 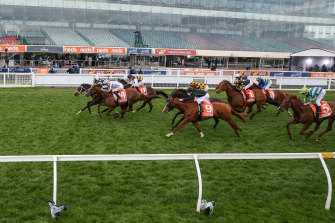 Sierra Sue, with Daniel Moor in the saddle, wins the Sir Rupert Clarke Stakes at Caulfield in front of an empty grandstand.Credit:Racing Photos

Moonee Valley is also preparing for a Cox Plate carnival without crowds, with only the Victoria Racing Club a chance to host racegoers for its Melbourne Cup carnival.

Over the past two spring carnivals, the MRC has proposed some bold ideas to try and get fans back to the racetrack. Such proposals have included moving the Caulfield Cup to late November – after the Melbourne Cup – to improve the likelihood of crowds, and also pitching a fully vaccinated crowd at the Caulfield Cup with hopes of hosting 10,000 on course.

“There doesn’t seem to be an appetite to try much at the moment.

“We’ve got things like members’ guarantees now that get enacted, sponsors and partners and dealings we’ve got to work through, so we’ll work through that in coming weeks.”

But one initiative the club has approved for this spring was the swapping of venues for the Underwood and Zipping Classic meetings.

This Saturday’s Underwood, on AFL grand final day, will be run at Sandown, with Caulfield now the host venue for the Zipping Classic meeting in late November.

Blanksby said his club would aim to host as many racegoers as possible on that day.

“That’s a positive; late November on the current road map, we should be all out [of lockdown] with things happening again, so we’ll put a lot of focus onto that,” he said.

“We’ve got to make sure the Caulfield Cup still gets its iconic positioning, so there’ll be a lot of things to members [around] the home experience, but in terms of something to look forward to, we’ve got the Zipping Classic on November 27.”

“In recent weeks, the MVRC was hopeful that we would be in a position to welcome a crowd of up to 5000 spectators to The Valley,” chief executive Michael Browell told members in an email.

“With NSW announcing their road map that included attendance at race meetings at the 70 per cent fully vaccinated mark, we had hoped that Victoria would announce similar arrangements in releasing our road map out of this current lockdown.

“It was incredibly disappointing yesterday to see that spectators won’t be permitted back to the track until Victoria achieves 80 per cent full vaccination, which is estimated to be 5 November.

“It is now certain that we will not be permitted to have members in attendance at the 2021 Ladbrokes Cox Plate Carnival.”

Browell said the club would look at ways to compensate members.

The VRC, however, is still a chance of hosting some crowds during its Melbourne Cup Carnival, should Victoria’s eligible population reach 80 per cent fully vaccinated in time.