Cricket Australia may offer players new percentage-based deals rather than fixed salaries in coming weeks as the governing body considers a proposal to re-configure its contracting system in the face of the COVID-19 crisis.

Cricket in Australia has been largely shielded from the effects of the coronavirus outbreak so far, although the winter Test series in Bangladesh and limited-overs campaign in England are unlikely to go ahead and the cancellation of the Indian Premier League will cost some players millions. 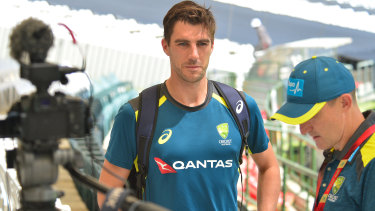 The players agreed to ride the highs and the lows of cricket’s finances when they secured 27.5 per cent of agreed revenue streams in 2017 following a bitter industrial dispute with CA.

According to the 2019 CA annual report, the men’s and women’s players shared in $104.5m in the preceding year – but players would forgo about $80m if Virat Kohli’s men couldn’t tour here this summer, with a cancelled India series forecast to cost CA $300m.

The Australian Cricketers Association confirmed it had informally proposed a percentage-based retainer option to CA to help deal with the uncertainty around COVID-19 and streamline the process of players’ pay being adjusted.

“The players have committed to the revenue-share model in good times and bad. The players will hold up their end of the bargain,” ACA chief executive Alistair Nicholson said.

“We need further information from CA about its revenues and contingency planning, that we hope to receive when available. We know this is challenging but we are working through this together as part of our partnership model.”

CA says it has used a percentage system to pay players previously in years when collective bargaining agreements have been negotiated, but the circumstances this time around are very different.

“I think there’s a fair bit of water to go under the bridge from a cricket sense,” Australia’s Test captain, Tim Paine, said on Tuesday when asked about the impact of coronavirus on the game.

“But certainly if things happen similar to what’s happened in football and other sports we’ve certainly got to do our bit to make sure that the game survives and remains healthy for years to come.

"If it comes to that I’m sure [pay cuts are] something that the players will look at but there’s bigger issues going on at the moment around the world than how much our sportsmen are getting paid.”

Cummins is likely to keep his spot at the top of the CA contract list, with Steve Smith, David Warner, Mitchell Starc, Josh Hazlewood, Marnus Labuschagne, Nathan Lyon and Paine occupying the the other leading positions.