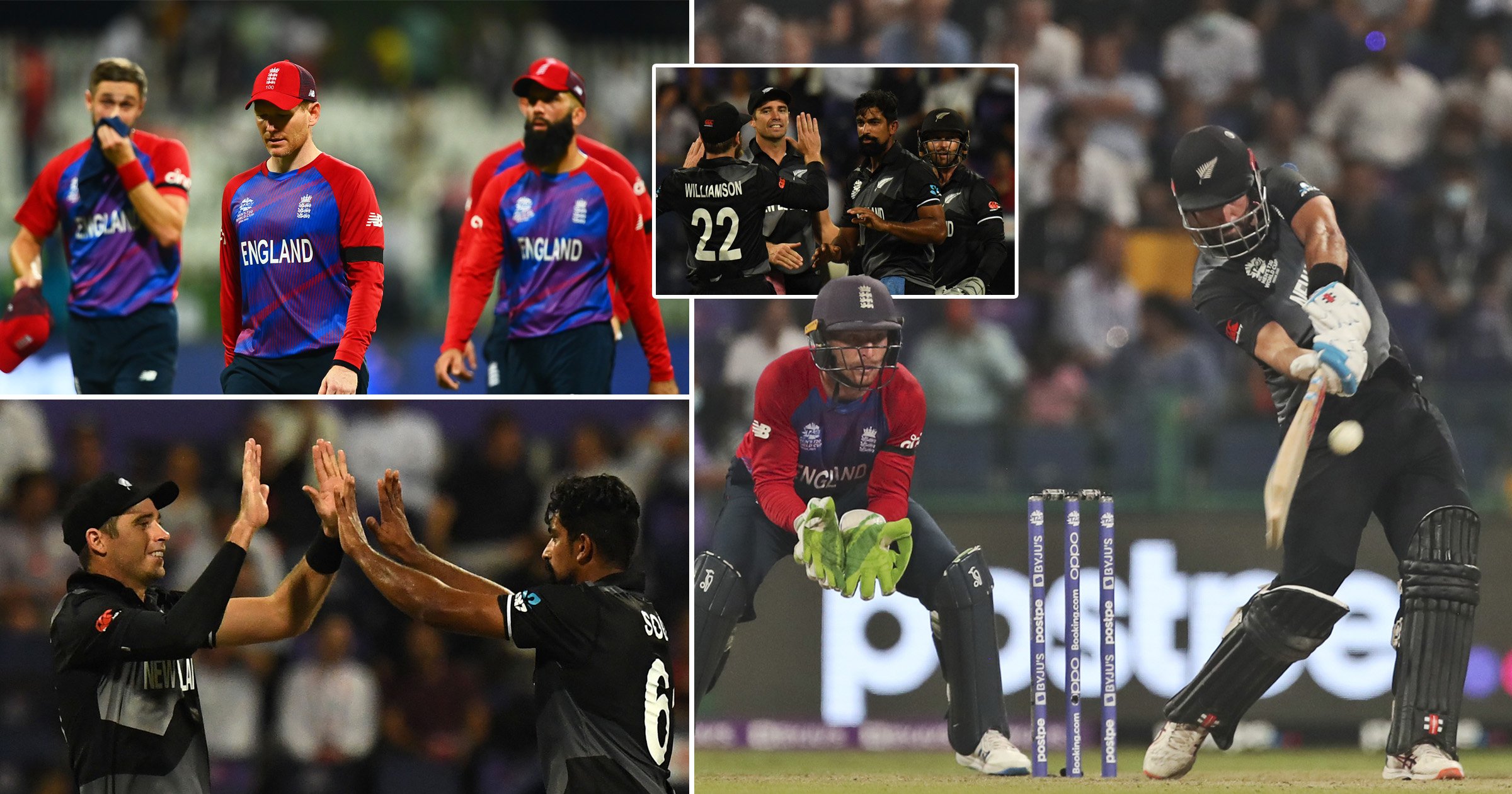 New Zealand stunned England with a brutal blitz with the bat to reach the T20 World Cup final and deny Eoin Morgan’s side a shot at history.

In the first semi-final in Abu Dhabi, Moeen Ali’s 51 not out guided England, the reigning champions in 50-over cricket, to 166-4 from their 20 overs.

Dawid Malan (41), Jos Buttler (29), and Liam Livingstone (17) also contributed as England, ranked No. 1 in the world, scored 99 from the final ten overs after a tricky start.

The impressive Chris Woakes took two early wickets and a fantastic spell from Livingstone (2-22) saw New Zealand slip to 107-4 in the 16th over.

England appeared to be heading to victory and another major final at that stage – with the Black Caps needing 57 from the final four overs – but Kane Williamson’s side stormed back in a thrilling run-chase through Jimmy Neesham and Daryl Mitchell.

Neesham (27 off 11) blasted three sixes and took Chris Jordan for 23 in a decisive 17th over, before Daryl Mitchell (72 off 47) saw New Zealand home with six balls to spare.

It will be a bitter pill to swallow for England, who cruised through the Super 12 stage as group winners and were bidding to become the first team in history to hold both the 50-over and T20 World Cup trophies.

But it was another brilliant chapter in the fascinating story of New Zealand, who suffered a heartbreaking defeat to England in the World Cup final in 2019 and were crowned World Test Champions earlier this year.

The Black Caps will face either Pakistan or Australia – who play on Thursday in the second semi-final – in the T20 World Cup final on Sunday in Dubai.

Williamson won the toss in Abu Dhabi and unsurprisingly, given the trend of winning when bowling first during the tournament, inserted England.

Experienced pace bowlers Tim Southee and Trent Boult produced three subdued overs before Boult’s second over went for 16, the in-form Buttler beginning to threaten another match-defining innings following his century in the group stage against Sri Lanka and brutal 72 not out against Australia.

The introduction of Adam Milne worked wonders for New Zealand and the 29-year-old dismissed Jonny Bairstow – promoted to open in replace of the injured Jason Roy – with his first ball courtesy of a fine catch from Williamson at mid-off.

Buttler reverse-swept Mitchell Santner superbly for his fourth boundary but the same shot brought about his downfall as Ish Sodhi got one to skid through and trap the England star LBW.

Malan, who was the top-ranked T20 batsman in the world up until last week, produced his iconic cover drive to great effect, hitting four boundaries as England reached three figures at the end of the 13th over.

A rare maximum from Malan hinted England planned to put their foot down, but he nicked off to the very next ball from Southee to depart for 41 from 30 balls.

Moeen hit his first six at the end of the 16th over and the next set from the returning Milne proved productive for England, with 16 coming from it as both Moeen and Livingstone cleared the ropes.

England added another 20 from the final two overs to post a competitive 166-4, with Moeen bringing up his first World Cup fifty and finish unbeaten on 51 from 37 balls.

Woakes has been brilliant for England with the new ball and recovered from seeing his first delivery fly to the boundary to strike with his third ball, dismissing the dangerous Martin Guptill, who was famously run out off the final ball of the 2019 World Cup final.

The Warwickshire star made another early breakthrough in his second over as Williamson uncharacteristically lost his shape attempting a ramp shot and offered Adil Rashid a simple catch at short fine-leg.

New Zealand rallied towards the end of the powerplay – Conway and Mitchell both finding the boundary – but were reeling on 36-2 after six overs.

Conway and Mitchell were still at the crease at the halfway stage but the New Zealand innings was lacking impetus, with the Black Caps needing 109 to win from the final ten overs.

England’s standards slipped for a two-over period as the 11th from Mark Wood went for 15 and Rashid was hit for a maximum, but Livingstone had Conway stumped for 46 as the required run-rate edged above 11.

New Zealand reached 107-3 after 15 overs – England were 110-3 at the same stage – but they were dealt a blow when Livingstone chipped in with another huge wicket to dismiss Glenn Phillips, with the part-time bowler finishing with 2-22 from four overs.

But just as it was slipping away from New Zealand, Neesham smashed England seamer Jordan for three boundaries – including two sixes – in an over costing 23, the most expensive of England’s T20 World Cup campaign.

The momentum was firmly with New Zealand and 34 from 18 became 20 from 12 as Mitchell began to find the middle of the bat, hitting Woakes for two more sixes in the 19th over as England’s capitulation was confirmed.

Another boundary from Mitchell took the Black Caps to victory with an over to spare, New Zealand completing an extraordinary fightback to knock out 2010 champions and 2016 runners-up England.