Home » Sports News » ‘No one is a robot’, but Smith runout reaction can’t become a habit

Vice-captain Steve Smith was not considered worthy of censure within the Australian team for his emotional reaction to the day two runout that ended his only innings in the first Test in Galle – provided public dressing downs of teammates do not become a habit.

After a mix-up with Usman Khawaja, Smith’s outstretched arms and vigorous shakes of the head were directed squarely at his batting partner, in the only moment to sour a comprehensive opening victory for the tourists. 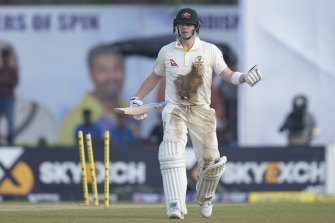 Steve Smith reacts after being run out for six.Credit:AP

Australia’s captain Pat Cummins, who was outspoken in wanting Smith alongside him when he took on the leadership of the Test side after Tim Paine’s resignation last year, indicated that so long as such moments were not repeated, he could accept his deputy reacted in the heat of the moment.

“I mean no one is a robot, I think it was spur of the moment,” Cummins said. “I think he calmed down. He is the vice-captain of the team so he is not just the batter out there. He thinks about those things as well.

“It’s a one-off. He has been brilliant. It’s one of those ones where if it goes too far in any direction it’s my job as captain to step in, but yeah, that was a one-off.”

Plenty of notable voices, including those of the past captains Mark Taylor and Adam Gilchrist, made the points that no one ever means to run out a partner, and that Smith’s response was out of proportion to that reality. Taylor has mentored both Smith and Cummins.

It was a moment familiar to many who had seen Smith react with a similar lack of filter after having his innings ended by umpiring decisions he did not agree with – Marnus Labuschagne has exhibited a similar tendency at times.

Smith, who at 33 remains singularly obsessed with the art of batting, is understood within the team to be someone who lives for his cricket to a particularly high degree.

“I hate getting run out,” Smith had said. “I think anyone does, particularly given the conditions and just gifting them a wicket, one of the most experienced players, I was pretty upset.

“That happens in the game, I got over it pretty quickly, had to keep moving forward and that’s part of the game. I spoke to ‘Uz’ straight after, it was pretty chilled, so mix-ups happen, and we keep moving on.”

For his part, Khawaja emphasised a need to move forward. “There wasn’t really too much to it. We’re both professional cricketers,” he had said.

“Stuff on the field of play happens, and you just move on and push on. You’re always just looking to the future. If you’re looking to the past, it doesn’t help anyone; there’s not really much to report.”

Australia’s leadership has also emphasised the good behaviour and cohesion of the team so far in the tenures of Cummins and the new head coach Andrew McDonald, notably in the foreign climes of Pakistan and Sri Lanka.

“We’ve been here for five or six weeks and it is still a challenge,” Cummins said. “A lot of people are here without their families. There are still the COVID restrictions. The country is in turmoil here and I think the way everyone has dealt with it has been fantastic. So I couldn’t be happier.”